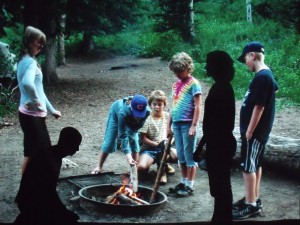 Susan Sontag, in her seminal essays published in the early seventies in “On Photography,” observed that “ultimately, having an experience becomes identical with taking a photograph of it…”. And this was long before digital cameras, camera phones, photos on Facebook, sharing photos with Flickr—before photos everywhere, all the time. If life, now more than ever, is merely a series of photo ops, the promise of The Neo-Futurists’ “I Am A Camera,” especially given its populist title, seemed especially timely. (As far as  I can tell, this production has nothing to do with the John van Druten play of the same name, which was made into a film and later was the basis for “Cabaret.”)

Vintage family photos flash on slides projected on a screen while patrons take seats in the theater, conveying a simple but powerful promise. I have no idea who these people are, but somehow they evoke my life, my family, a “Family of Man” reminder of all our basic similarities. This opening montage also clues us in that we’re not going to be exploring the meanings and ramifications of today’s pervasive photo-culture, alas. In fact, almost nothing in this show could not have been done at the time of Sontag’s book.

Instead we’re treated to a series of sketches that are like performance-art bits, wherein the show’s writers and performers, Caitlin Stainken and Jeremy Sher, amble through a narrative-free exploration of mildy interesting ideas, most of which overstay their welcome and some, like the “living photogram” shadow play, really overstay their welcome. Music soundtracks much of the show in place of dialogue. In the first bit, Sher enters the theater and smiles for the “camera,” to the powerful strains of Mission of Burma’s “This Is Not A Photograph.” As the song plays in its entirety and his smile becomes increasingly forced, we are reminded of the artifice, especially as it regards emotions, that lies behind so many of our visual “records.” Got it. When Stainken needlessly repeats the whole exercise, it foreshadows the need for some heavy editing. From here, Sher and Stainken do a bit where they verbally recite their personal biographies, in alternating factoid form, creating a “word picture” that intentionally comes up short in conveying a sense of who they really are. “The Interview” consists of a Q&A session wherein either the Q or the A comes in the form of one of the “stock” photos of each other that are messily arranged across the desk in front of them. A picture is worth a thousand words, I assume. The actors hold and play with pieces of white paper in front of a projector in one of the evening’s most visually interesting sections but I haven’t deciphered any deeper meaning, other than it, too, goes on  too long.

In his notes in the program, director and creator Greg Allen points out that his first career in the arts was in photography, which perhaps explains the show’s fixation on the properties of photographs rather than their cultural meanings.  This show reminds me at times of taking in the video room at an art museum where you encounter intriguing, sometimes stunning, visual motifs, often repeated in a looping manner for effect. At an art museum, though, you simply move on to the next exhibit when you’ve seen enough.

Nevertheless, voyeurism sustains this short (one-hour) work, as we literally study the lives, faces and bodies of our two performers. It’s ultimately only a surface study, and this thinness seeps into the performances—the actors seem oddly unconvinced about the material. It’s a challenging way to convey an idea—that life captured in photos is ultimately a shallow facsimile of the real thing—relying on the audience to “get” that its disinterest is really the show’s message. If there is a message at all. (Brian Hieggelke)