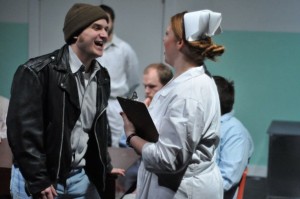 As I enter my sixth year of Chicago stage criticism, I find it harder to distinguish raw talent when it’s marred by bad material. Because no matter how much passion and commitment is pumped into a mediocre play, the evening usually becomes a case of watching performers working tirelessly, but to tiresome effect.  The hard work on display at the Viaduct Theater is courtesy of The Consortium Project, a brand new Chicago ensemble comprised mostly of Florida State University Theater graduates, and the so-so drama is the 1970 stage version of “One Flew Over the Cuckoo’s Nest” by playwright Dale Wasserman, and based upon Ken Kesey’s 1960s novel of the same name.

The play brings to life Randle McMurphy, a paragon of individuality and free will that is emblematic of the spirit of the 1960s. Evading prison (for statutory rape) by voluntarily submitting himself to a mental asylum for rehabilitation, McMurphy’s “Jock Christ” (as the late Pauline Kael wonderfully nicknamed the character in her review of the 1975 Milos Forman film version) raises hell and ultimately sacrifices himself in an attempt to inspire his fellow inmates—a motley crew of emotionally and psychologically crippled men—to rise up against the tyrannical and oppressive Nurse Ratched (Tracy Wray), herself emblematic of totalitarian power structures.

While the play’s original objectives remain beyond critique—the hospital as microcosm of hierarchical society, a spotlight on the abuse of mental patients, the R.D. Laing-inspired view that sees a fine line between sanity and insanity—the play lacks dramatic tension and is simplistic to the point of naïve in its implicit message that male bonding is the cure-all (this was written, after all, by the “Iron John” generation of men that would later go on to beat drums naked in the woods in an attempt at spiritual and therapeutic healing).  Subsequently, the play’s view on women—as either emasculating ball busters or ditzy sex pots—is embarrassing to say the least.

Saddled with this problematic and at times anemic material, it’s a wonder the cast make any impression at all.  Still, there are moments. As McMurphy, Evan Absher comes onto the stage like a testosterone-fueled tornado and never winds down. He’s not a particularly handsome actor, but neither were Gary Sinise or Christian Slater when they tackled the role in separate productions in the early 2000s. Instead, like Sinise and Slater, Absher exudes a cocksure charisma that quickly transforms into a sexy swagger on the stage that’s entirely watchable.  And like Sinise, Absher boasts a curious admixture of sideburns, Midwestern twang, aquiline nose and intensely penetrating gaze that occasionally makes for a brooding intensity. I was disappointed that after a finely calibrated and controlled start, Ms. Wray’s performance of Nurse Ratched quickly descended into predictable monstrosity. What’s needed is a reading that plays this tricky character against type, finds sympathy in a woman who’s known nothing but structure all her life, and can make the power struggle between Ratched’s Machiavellian rule-follower and McMurphy’s mischievous rule-bender amount to more than just a shopworn metaphor for the machine crushing the individual. In the supporting roles, actor Eric Bays brings some much-needed pathos to the production with a gentle and thoughtful interpretation of the sexually confused Harding, and Adam Cobb as stuttering mamma’s boy Billy Bibbit reminds me—thanks to his bespectacled and roly-poly comic vulnerability—of a young Alan Wilder.

The Consortium’s mission statement is to produce conscious-raising theater, and their business model dictates that portions of their ticket sales be donated to not-for-profit organizations, very much like the now-defunct Brown Couch Theater did years ago. I fear for Consortium’s fiscal survival, but applaud its agit-prop sensibilities that desire to highlight audience complacency in the face of supposed progress as it relates to the subject and treatment of mental illness. I just wish this young company would have tackled it with the help of a far better play. Thematically and dramatically, Peter Brook’s “Marat/Sade” (1964) or Harold Pinter’s little-known “The Hothouse” (1958, revised 1981) would have been far better choices than this soft-boiled work. (Fabrizio O. Almeida)