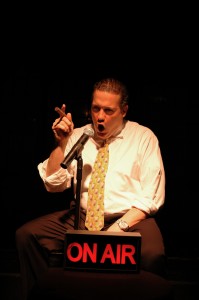 How do you make a satire about a satire?  That meta question goes unanswered—disappointingly so—in Second City’s new show “Rush Limbaugh! The Musical!”  There is so much lacking here, it’s hard to know where to begin.

Say what you will about the man, Limbaugh’s entertainment instincts are impeccable; he knows how to put on a show. Personally, I would have loved to see Second City parse what it is exactly that makes Limbaugh tick as a pop-cultural entity. Creators Ed Furman and T.J. Shanoff (with director Matt Hovde) choose a different track, portraying Limbaugh as a cigar-puffing, money-obsessed boob—which would be fine if it weren’t so predictable.

Let’s back up a moment.  Just about everything Limbaugh says or does has the whiff of satire and farce to it, and it’s never entirely clear how much is carnival barking and how much is true-blue sentiment. But to simply paint the guy as egotistical, racist, venal, sexist and hypocritical, well that’s as reductive as it gets. These are all the usual beefs against the guy, and it’s the obvious route. How do you puncture Limbaugh’s persona—and his wildly successful history of bloviation-as-political-discourse—in a new way?  Frankly I don’t have the answer, but I’m not the one creating a show, either.

So why bother with a comedy about Limbaugh at all? Second City’s huge success with “Rod Blagojevich Superstar!” last year would be the main reason. (Interestingly, tickets for that show’s initial run cost just $14; this time around prices have jumped to $25.)

And while everyone was united in their disgust for Blago (and Joey Bland’s doofy portrayal was a bit of genius), Limbaugh is a different sort of creature altogether—far more clever and interesting, in fact, and no amount of equal-time bashing (Hillary Clinton and Barney Frank are the butt of several jokes) is going to make up for the lack of real, probing comical insight. The show is very heavy on its feet, and it borrows liberally (sorry) from the Broadway songbook, contemporary division. Frankly, I could do without the melodies ripped off from “Wicked” and “Rent.”

That said, I liked what Mark Sutton is doing with the part. He has Limbaugh’s cadence just right—it’s always amusing when Limbaugh goes into “from-the-pulpit” mode—and I wish we saw more of him actually doing the radio show itself.

Ultimately I think where Limbaugh is concerned, real life tends to be funnier than anything even talented guys like Furman and Shanoff can come up with.

Consider this story. From 1984 until 1999, Limbaugh used the opening riff from The Pretenders’ “My City Was Gone” as the theme song for his nationally syndicated radio show. He never paid anyone a dime for the rights, until finally Chrissie Hynde woke up and realized, hey, he’s stealing my song.

Mainly she was ticked off because Rush called her “an environmentalist, animal rights wacko” who wrote an “anti-conservative song. It is anti-development, anti-capitalist, and here I am going to take a liberal song and make fun of [liberals] at the same time.” Right. Or Limbaugh knows the power of a killer bassline when he hears one. The man is nothing if not an expert showman, and every show needs a memorable theme song.

At any rate, his backpedaling rant about “My City Was Gone”—like all of his rants—was the verbal equivalent of leaving a burning bag of shit on someone’s front stoop. It’s a talent he has perfected like few others, and you have to admire its fucked-upness in a weird way. Limbaugh has performative instincts like no other person in radio.

Hynde, strangely quiet all those years, finally piped up in the summer of 1999 and forced Limbaugh to pull the song. A month later she changed her mind, with the stipulation that all future royalties be donated to PETA.

So, think about that. Rush forgets that capitalism means, ya know, paying for stuff. Meanwhile Hynde allows him to rob her blind for fifteen years. And then she decides, well, it’s fine as long as he forks over the dough to a lefty political cause. It’s a resolution made in sketch heaven: Limbaugh gets to keep his trademark theme song, and Hynde gets to funnel a portion of his show budget to an organization he publicly hates. It has to be the weirdest outcome imaginable—the apex of idiocy for both the left and right. (Nina Metz)