by Monica Westin
February 8, 2010Filed under: 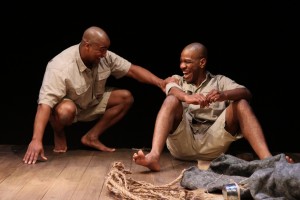 This show exemplifies the limitations of what even the most gifted directors and actors can accomplish with an outdated playscript; Fugard’s 1960’s South African anti-apartheid play is quintessential political art that doesn’t stand the test of time. “The Island” refers to the infamous Robben Island prison (that held Nelson Mandela, among others), where two cellmates perform hard labor during the day and rehearse “Antigone” at night for a prison talent show. The parallels between the two stories (Antigone, of course, is sentenced to life) is just as heavy-handed as the dialogue, which is full of frankly hackneyed lines about liberation: when one learns he has only a matter of months left on his sentence and counts the days on his fingers, the other shouts “I’m jealous of your freedom—I also want to count!” The show ends with their short DIY production of the Sophocles, which is both funny and surprisingly compelling, but the first ninety minutes of the show really drag from predictability. Very few lines hit home, despite masterful acting by La Shawn Banks and Kamal Angelo Bolden, who manage to draw out the comedy of the production while lending it a sense of nobility. It’s a shame that the writing simply doesn’t stand up to the thought that’s obviously gone into this production; even the set, minimalist and reticent, says more about the power of invention and imagination as instruments of freedom than the play itself. Director James Bohnen adds  interest by highlighting the sisyphian and mind-numbing nature of their work in a gorgeous drawn-out first scene of each digging holes in the sand that the other fills in with a wheelbarrow, so that we feel as much relief as the characters when the whistle blows. (Monica Westin)