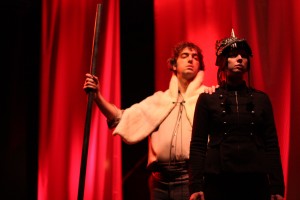 It’s 9:30pm on a Saturday night and the cast of the Building Stage’s “Ring Cycle,” their six-hour adaptation of Wagner’s epic, four-part opera cycle, “The Ring of the Nibelung,” has just taken a curtain call following their third preview showing. The audience has been here since three o’clock this afternoon (I can only imagine the company arrived at least a couple hours earlier than that), and yet no one seems in a hurry to exit this West Loop theater—small clusters of people are still lingering, greeting the cast and crew as they emerge from backstage. The atmosphere is celebratory as directors Blake Montgomery and Joanie Schultz make their way through the house. If they’re exhausted, you’d never know it—on the contrary, they seem energetic, joyful and eager for the final week of work ahead before their official opening on February 13. So close to their work being done, the obvious question is where did they begin?

According to Montgomery, “We asked ourselves ‘what’s the craziest thing we could do?’” And though said with a laugh, there’s no question that he means it. In the nearly five years since Montgomery founded the company, The Building Stage has made a name for itself by creating innovative new works based on existing sources from literature, film and other media, as well as original material. Both having an interest in Wagner’s opera, the Norse mythology on which it is based, and long-form theater performance, Montgomery and Schultz agreed that transforming the cycle into a non-operatic theater production was just the kind of challenge the Building Stage was ready for.

Once they’d decided, Schultz says, “then there was the [challenge of] convincing other people too, getting a group of actors to commit five months to working on this. We had to love it enough to convince them that it was a good idea.” The obstacles were plentiful and immediate, as the duo set upon drafting an initial script, pulling “from four or five different translations, some recent, some old and bad,” in order to shape the strongest dramatic structure for this intriguing, layered tale of love versus power. Once a working script was in place, the rehearsal process began with a solid month of table work, with the team focusing strictly on exploring the text and grabbing hold of the “juicy melodrama” within.

As they focused intensely on the sweeping narrative of the piece, with its many characters and overlapping stories, Montgomery admits that “[in the beginning] I overlooked for a long time how many technical elements there are.” Indeed, Wagner’s libretto calls for many “impossible” elements—a rainbow “bridge” that will take the gods to Valhalla, giants and dragons, islands on fire, underwater nymphs and disappearing/reappearing dwarves. These moments Schultz and Montgomery have realized onstage using puppetry, aerial acrobatics and complex lighting effects, “pushing the limits of what our equipment can do,” says Montgomery. And while the directors agreed early on that they would not directly use Wagner’s score in their production, they tapped composer—and frequent collaborator—Kevin O’Donnell to create original music that he performs onstage with a live band. 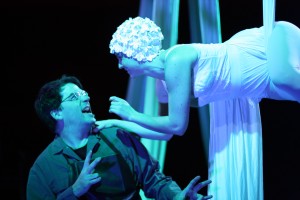 And as the work has taken shape, now days from beginning its month-long run, both directors agree that, hand in hand with their excitement in bringing these stories to the stage is their passion for doing so in such an epic format that audiences rarely get to experience in the theater. “The hope,” says Schultz, “actually derives from what Wagner himself was doing—when he wrote this work he was really looking at the Greek model of theater where the community comes together and watches plays for four days and talks to each other, thinks about life, themselves and their society. And he wanted to do that himself with “The Ring Cycle”—which is why he built his opera house out in the middle of nowhere; so audiences would have to go there and just be there. I think this is the closest we can get to that same [Greek model].”

To that end, the theater is also offering audiences the opportunity to pre-order a catered box meal, or to even bring their own picnic to spread out onstage during the dinner break. As Montgomery sees it, “in the theater we love to talk about this idea of community. Canadian director Robert Lapage influenced me a long time ago when he said something like ‘I’m not interested in communicating but in communing, communion, being together.'” So clear your calendar, grab a friend, sit back, get comfortable, and enjoy.