by Monica Westin
February 9, 2010Filed under: 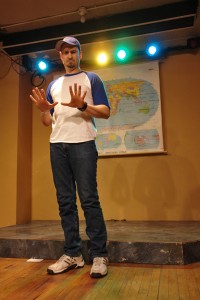 Probably most appropriate for high-school audiences, James Anthony Zoccoli’s one-man show presents his childhood of racial identity confusion in a combination of monologue, stand-up and family slideshow, with some fly-for-a-white-boy dance moves that keep the show dynamic—and a DJ off to the side spinning tracks that complement the story cleverly. Spanning from age seven, when his mother married a black man who raised him, to Obama’s election, Zoccoli’s account offers a sincere and sometimes awkwardly honest look at the performance of race from the little-explored point of view of a white boy “raised black” (whatever that means, and Zoccoli doesn’t seem quite sure himself). It’s a shame that he doesn’t bring more complexity to the perspective—there are some really funny and insightful lines here, but they get lost in simplistic, occasionally smarmy civics lessons. But Zoccoli’s a gifted storyteller and born entertainer, and if his lecture on the originations of the word “caucasion” and human life in Africa are cringe-inducing, they’re quickly forgotten during his spot-on impressions of his family and pop culture figures of the eighties. (Monica Westin)

Thanks a LOT for the Recommended status! Thanks, also, for calling me “occasionally smarmy” after being called ‘perpetually smarmy’ by family, friends & co-workers for years!! But, seriously, folks, I (obviously) like to crack wise & I can laugh at myself. However, I do have one serious point: which is that my show is meant to be a self-deprecating retrospective (like, my own personal one-man ‘Mortified’), rather than an attempt at “civics lessons”. Some sections in particular are supposed to reveal my “cringe-worthy” teenage perspective & the show in general (though possibly containing ‘teachable moments’) is not intended to be… Read more »