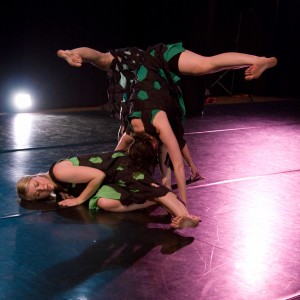 For the past five years, the Space/Movement Project has been making dance as a collaborative group without sole leadership. Their current project, “Safety in Numbers,” was performed last year as a collection of individual pieces, but has since been revised, amended and edited into a singe work by multiple authors. After a run-through of the revised piece, all the members of SP/MP sat down to talk with me about the show. The flow of their conversation—the swells of excitement over shared ideas, the still moments of individual reflection—provided both a glimpse into their creative dynamic and a fair representation of the considerable rewards of rigorous collaboration.

“It’s amazing how you can tell when something works and when it doesn’t,” said member Larisa Eastman. “Group intuition is really powerful. And we’ve been learning to edit ourselves; there’s a lot of ego check.”

“I don’t think there’s a lot of ego here,” replied Chloe Nisbett, who’d just re-entered the room. Chloe had ducked out to change, presumably because she hadn’t contributed any of the initial choreography, but joined the group later on. Megan Schneeberger remarked on the importance of adding fresh blood to the project.

“It was great having two members come in without attachment,” she said. “Art can be a lot of navel-gazing; it’s good to have someone new come in and say ‘why don’t we do it this way?’ Then you have a reaction of ‘but THAT’S where I do the THING’ and you have to learn to let go.”

“Safety in Numbers” is inspired by each member’s connection to the city. The sections of the work are still stylistically distinct—Anne Kasdorf’s structuralist take on the grid system uses the same angular phrase in repetition to gradually move the dancers from up stage left to down stage right, a dramatic contrast to the playful shapes and high-energy romping in Leah Raffanti’s section inspired by her family heritage of bowling leagues, baseball games and rock ‘n’ roll—yet the work holds together as a single vision, an anthology of individual voices united by a shared goal. (Sharon Hoyer)