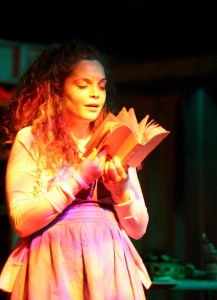 A good chunk of my youth was spent at summer camp, and I loved the intense relationships that formed over a matter of days. It always felt like you were going to be BEST FRIENDS FOR EVER!!!

A goofy but intensely gossipy slumber-party culture permeates summer camp. For all its unobscured nature and forestation, camp always felt like a strangely hermetic environment, but to this day I’d rather swim in a lake than the ocean. I’d also rather watch “Wet Hot American Summer” than just about anything else starring Michael Showalter and Michael Ian Black.

I never went to Jesus camp, but judging by the atmosphere captured in “11:11”—the high-spirited, genuinely funny comedy from The New Colony currently occupying the upstairs studio at the Victory Gardens Biograph—apparently it’s not that different from any other camp.  Camp is camp.

The counselors here may drop references to God and Jesus the way I used to obsess over care packages. But when it comes to the all-over “camp” vibe, playwrights Evan Linder and Tara Sissom (working with director Meg Johns and an excellent cast) have it nailed.

The New Colony might be the most promising young company to come along in a long time. In just a year-and-a-half, they have produced four shows (four-and-a-half, if you count their Sketchbook entry)—each an original work penned by ensemble members, and not a single misfire in sight.

I can’t think of any other company with that kind of track record. Their shows are aimed squarely at audiences in their twenties and thirties,  but I suspect the appeal is much broader.  The ensemble—a seriously talented collective of actors, writers and directors—hasn’t had much of a learning curve when it comes to figuring out what it takes to produce a good-looking show, with solid, entertaining writing to back it up.

And so, with “11:11” (which refers to a Bible verse) we witness a group of camp counselors swallowing a few tabs of Ecstasy (they think it’s Aleve) the night before their campers arrive.  It is basically “The Big Chill,” Bible camp version: Put a bunch of old friends in a room together, add drugs and see what happens.

Secrets are spilled, saliva is swapped and, oh yeah, beliefs are challenged.  The production is a bit jangly and nervous in its first few moments, but once it settles down—once all the characters have made their entrances and established who they are for the audience—the show really gets cooking. This is a play that takes religious faith seriously, but refuses to sweat over it. I found it to be an accurate portrayal of differing levels of spiritual conviction you might find amongst any group of friends or colleagues. (Even the most devout character here doesn’t come close to a Pat Robertson fanaticism—she’s more of cheerleader for Jesus.) “But seriously, how is your faith?” goes a line that is both earnest and ridiculous, and intentionally so.

These are characters you enjoy spending time with (both playwrights are in the cast) and their easygoing rapport feels honest and true—it’s the essential prerequisite that sells the script’s broader stabs at humor and drama. (Nina Metz)