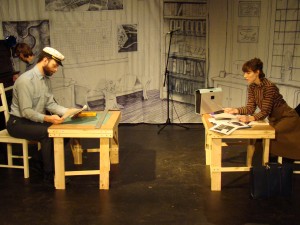 The Decline of Ballooning

This gorgeous pairing of unlikely musicals was a highlight of this year’s Rhinofest. B.T. Scott’s “Decline of Ballooning” is the stronger of the two, an abstract, delicate piece about the pained relationship between two aerial photographers. The story’s diagesis, which necessitates some staging as improbable as “Lear,” is broken up by disjoined interjections by Cupola Bobber’s Tyler Myers and a pianist playing surreal and Brechtian songs written by Scott and Sam Wagster. The overall effect is more lyrical and understated than one might imagine a play involving people falling from airplanes and receiving invasive surgery onstage could be. Devin King’s “Madame X Paints Haydn Red” is less coherent but just as striking at times; King monologues about Haydn being “sort of a dick, like Frank Zappa” in his music, the story of the two skulls in Haydn’s tomb, the history of vinyl, and the lost art of phrenology while collaborator Sean O’Connell and he create a sort of ambient music opera. The only problem here is that the music is technically boring and often tedious, especially sections that seem to meditate on the sound of rewinding. (Monica Westin)