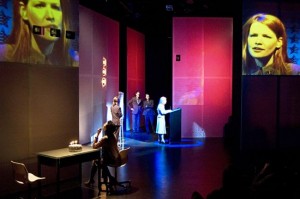 “Wilson Wants It All, ” the newest show from House Theatre of Chicago, directed and conceived by Michael Rohd and written by Rohd and Phillip C. Klapperich, may not take the whole shebang, but it damn well comes close. Set thirty years in the future in a seven-party America on the brink of a civil war over reproductive rights, “Wilson” tells the story of a reluctant Hope, the daughter of a slain senator who has been endowed with the… well hope of a divided people.  Another young woman, Ruth, looks remarkably similar to Hope and is just as discontent with her life.  The two switch places and with the help of the titular political advisor, the new Hope makes a run for office.  Part “Minority Report,” part “The West Wing,” and entirely House, “Wilson” is a feat of storytelling, an engaging ride that employs theatrical magic and inventive staging to create a world that breathes and flourishes. Though slightly too long, the play never drags for more than a minute and Rohd has created moments that defy time altogether with montages, slowmos and transitions that are cinematic in scope. And the sound design of Michael Griggs is worth the price of admission. His soundscape nods to the present but feels like the future, and in this case it is the bedrock that House’s signature magic is built on. (William Scott)