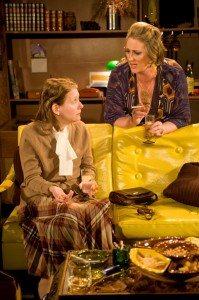 There’s nothing new here: in a satire of middle-class social life, a group of English suburbanites get sloshed at a cocktail party, grope each other, fight with their spouses, and listen to terrible music. The play grew out of improvisation by actors in the original 1977 production,  and while the cultural and stylistic datedness of the work is fun, it’s unfocused as a series of jokes rather than a coherent theater piece. The gags are predictable from a mile away, and the narrative as a whole seems to drag from one somewhat contrived  scene to another (a cuckolded husband trying to talk about art while his wife seduces a sleazy ex-professional soccer player), as characters get drunker and drunker and lurch toward an inevitable farcical tragedy. Social commentary about relationships and petty ambition comes through, but it’s dated in a way that keeps it from feeling relevant, such as a brief discussion of the neighborhood becoming “mixed.” What saves the show is the acting; Kirsten Fitzgerald in particular as the materialistic bulldozer of a hostess adds a much-needed level of sharpness. As a vehicle for astute comic actors to play off of each other, it’s an amusing time, but like a bad party, the show goes on just a bit too long. (Monica Westin)