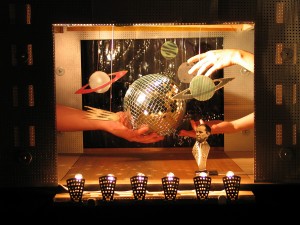 It’s a big weekend for Seth Bockley. In addition to his highly-anticipated performance promenade “The Twins Would Like to Say” with Dog & Pony opening at Steppenwolf Garage on Sunday, Bockley has curated the impressive lineup of artists at Links Hall’s Toy Theater Festival this weekend.

Bockley champions toy theater for its populist roots in nineteenth-century paper theater, which could be made in anyone’s living room as a precursor to television. The form has morphed from living-room entertainment to a cheap, DIY way of making performance that Bockley loves because it’s “not rarefied art.” We spoke to Bockley about this form he wants to be reclaimed as an everyday act.

Toy theater seems to be an exciting and increasingly popular form lately—I’m thinking of companies like Great Small Works, who I know are going to be part of this show. Why do you think there is such a strong interest in toy theater today? When did you personally become interested in the medium?

I became interested in toy theater, and puppetry more generally, through work with Redmoon back in 2004 during my mentorship with Frank Maugeri, now the artistic director there. I originally was more interested in writing and had no intention, really, of getting involved with puppetry, but through seeing what Frank was able to do with the medium, I became extremely excited and interested in this form of storytelling. So oddly, I had become involved as a writer for puppet theater, which was a strange thing to be, and our collaboration allowed me to see the potential of this form. I see it as a form that can both be in dialogue with and in competition with cinema—working with puppetry is closer to the work of a filmmaker rather than a theater director. One of the many cool things it allows is a way of performing animation—performing film really—by other means.

So toy theater is similar to film, and one of the reasons I really like it is because it’s this kind of live animation. I think audiences are really excited about it these days because we live in an age where labor is so concealed behind glowing screens, with no human touch in entertainment. In a similar way to the handcraft movement, toy theater allows us to value the crafted. That’s another part of it. In toy theater, which was originally a paper, a flat medium, we have a new way to see animation the way we would in a cartoon, but we also see the labor, and I think we love to see the labor behind something. We love to be in the presence of the labor. It wakes us up out of passivity.

You’ve got a lot of really exciting names in the show, from Great Small Works to Blair Thomas. How were the pieces chosen, and do you see them working together in any particular ways?

Well, these are artists who excite me, and except for Great Small Works, all the work they brought is new, so I began with artists rather than pieces. In this medium, I think it’s especially important to allow the imagination of these artists to go where it needs to go, and these are artists I trust deeply and want to give a platform to in order to build new work. The limitation of the form—if you can look at it that way—is enough of a limit. But if there is a through-line, a theme that keeps coming up again, it’s the uncanny, for example in Blair’s piece where he’s adapted a sermon from “Moby Dick” but he, as the puppeteer, is the devil. There’s always a bit of uncanniness and dislocated estrangement in these works, because the puppeteer is visible and not part of the story. That distance, between the puppeteer and the distance they’re manipulating the story from, is a theme in all these works. In addition to just seeing the labor, a lot of times these artists will make themselves in a character responding to or in tension with the piece. The best example would be Meredith [Miller], who’s doing a piece of toy theater meets burlesque, where this tension is all happening on her body itself.