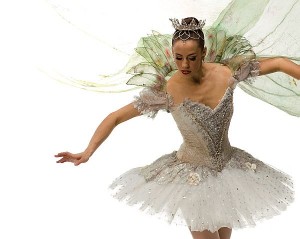 The Joffrey Ballet’s return of Sir Frederick Ashton’s “Cinderella” is well danced but lacks magic. First performed by the company in 2006, this retelling of the classic never gets as dark as the original source material and never gets as frothy and bright as more modern adaptations. The talents of the stepsisters are much appreciated exceptions: hilarious brawling divas so specific in their detail that the fact they are played by men becomes secondary to their comedic ability. Thankfully they dominate a bulk of the ballet. It isn’t until the end of the first act that Joffrey’s female corps takes the stage as fairies and stars and the audience gets a real taste of the magic this company is capable of. When a dozen or so of these remarkable women perfectly execute the quick, intricate formations the power is breathtaking. In act two, the men get a chance to show off their virtuosity at the ball. But these moments aren’t enough to keep the ballet from dragging, and the spectacle (like the rest of the production) is not nearly as exciting as the anticipation it evokes. (William Scott)