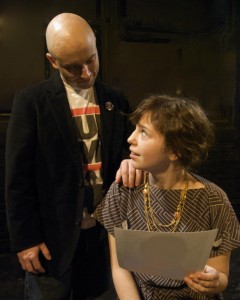 Technology unites and divides us; nowhere is that more apparent than in the auditory spank bank of a phone sex line. In Randall Colburn’s ode to the long-distance wank, Victoria (Katy Albert) takes a job as an operator. Print model Crystal’s (Susan Myburgh) likeness serves as Victoria’s phone line identity; she  obsesses about meeting Victoria, as does Crystal’s boyfriend Tommy (Nick Mikula).

Colburn’s script weaves the relationships together with so-so results. The second act drags as Victoria’s attraction to Crystal goes nowhere. Crystal’s relationship with Tommy ends happily, we’ve no idea why.

The cast does what it can. Albert handles the fine line between sex kitten and cynic; Myburgh’s energy is eye-catching but her twitchy physicality threatens to overwhelm her sincerity. Mikula captures his character’s sexual struggle. Nathan Robbel’s direction and innovative blocking make the most of a minimal set. Too bad the script wasn’t up to their commitment. (Lisa Buscani)