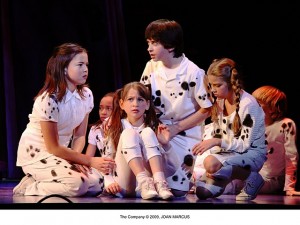 The beginning and end of this non-Disney adaptation of the 1956 Dodie Smith children’s novel features trained Dalmatians and, every now and then, a couple of them make cameos, usually running across the stage. When they do, the audience “oohhs” and “ahhs,” but when the actual dogs are backstage, there is little onstage to hold our interest, human, canine or otherwise.  And that is a big hole, some two-hours-plus of a two-and-a-half-hour show.

When a show is being produced by a dog-food company, it’s a good bet that you are not in for your standard Broadway fare.  A human playing a dog comes out before the Act II curtain with a bag of said food, pretends to eat it and comments on how wonderful it is, creating in effect a live stage commercial within the fabric of a show.  But as peculiar as that is, the brainstorming session that cooked up the central conceit of this show must have been downright bizarre: let’s take real, trained Dalmatians and mix them in with unruly kids that are supposed to be Dalmatians by just dressing those kids in white shirts and shorts or skirts, with spots, of course.

The dogs are dogs, to be sure, and the kids are—well, kids—but in this case, the kids run around and scream a lot, as if they are auditioning for the brats in “Cat on a Hot Tin Roof.”  This makes empathy for the dogs that they are playing—after all, the driving dramatic force of the story—a challenge, to say the least. Oh yes, and they do sing and even clumsily dance a few steps, none of this very convincingly even for kids that are supposed to be kids, let alone for kids that are supposed to be dogs (“Billy Elliott” is likely to look like the Bolshoi after this).  But there is also that little credibility problem of the fact that any possible leap of imagination that wild-acting kids are dogs goes out the window when we see real dogs—well-trained dogs, at that—next to them now and then as a point of comparison.

Plenty of songs will be needed, of course, so Dennis DeYoung of Styx fame—best known for pop ballads that strain upper vocal chords—would be perfect, despite the fact that few in the chosen cast will actually be able to sing them effectively. The result is an endless parade of blandly—sometimes poorly—sung melodramatic ballads about characters and situations that are never developed enough to care about, or involving new characters that appear out of the blue just to sing a song in an alternate tempo or genre, such as the advice-giving Calypso dog in dreadlocks.  (He must be a dog, as he was not on stilt shoes.)

Yes, this is a dog’s story, about dogs and humans from a dog’s perspective,  but with imagination, it can be done: think of “Cats” where our only awareness of humans comes through car lights in alleyways, or the way that Julie Taymor gave us an entire jungle of animals in “The Lion King.”  Think of “You’re a Good Man, Charlie Brown” where Snoopy has the best song in the show releasing his inner thoughts and makes us believe he is a dog amongst humans.  Or, the way the alien adult world ruptures into the child, cartoon world of “Peanuts” as “blah, blah, blah,” or in the animated versions, as a shrill trumpet.

Meanwhile, this is one show that when it does go to the dogs, the proceedings are actually elevated, even if temporarily.  (Dennis Polkow)