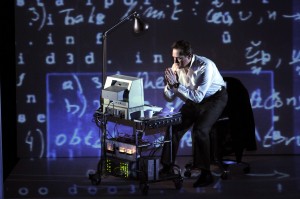 Aaron Copland used to routinely credit Berlioz for having virtually created the modern symphony orchestra.  Until Berlioz, composers wrote for orchestra as if it were basically an enlarged string quartet with winds used for timbral contrast and with strings and winds having very separate and clearly identifiable roles. It’s as if composers had only been painting in primary colors. With Berlioz, however, the full palette of the tone-color possibilities of the orchestra exploded with his daring blend of instruments in various combinations that created new sonorities that composers such as Mendelssohn and Rossini found incomprehensible and offensive; they actually assumed that he didn’t know any better.

This in part explains why it took the ultra-conservative and Italianate-centered Lyric Opera some half a century to present a single work by Berlioz. And once the company was ready psychologically to risk it a few years back for the Berlioz bicentennial, the expense of doing so scared it off in the wake of the economic downturn following 9/11: we still have yet to hear the promised “Benvenuto Cellini” that was forsaken for the box-office safety net of Gilbert & Sullivan.

The company decision to present a staged version of Berlioz’ oratorio “The Damnation of Faust” this season was a fairly safe one in a town where the piece had been a virtual party piece for Solti and the Chicago Symphony, even having been used as the basis for a memorable European tour that was the only time that the CSO Chorus went along. Still, the musical challenges of the work are enormous, way beyond anything Lyric had attempted since first mounting Wagner’s “Ring” cycle in the 1990s. The artistic resources of the company would be fully put on the line, admirable during a time of economic uncertainty.

The end result is well worth the wait. For those opera-goers who may not know the score, it is a real gem that is full of some of the most innovative and gorgeous music written during the nineteenth century.  Berlioz was way ahead of the standard operatic conventions of his day, so much so that this work was not stageable in his own time, hence the “opera-oratorio” label despite the fact that stage directions are included with the piece.  Berlioz was thinking cinematically at a time when the cinema did not even exist, of dissolves and cross-cutting as devices to tell the Faust legend.

Thanks to twenty-first-century stagecraft, this is now a work that can be staged, and British director Stephen Langidge, Greek set and costume designer George Souglides and German lighting designer Wolfgang Gobbel—all making their Lyric Opera debuts—along with projection designer John Boesche, give us a visually arresting new production that while contemporary in the best sense, illuminates the ever-fascinating soul struggle that makes up the Faust trajectory. 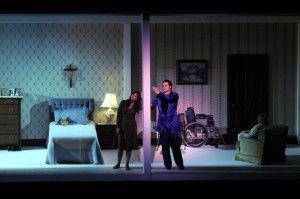 Yes, you could argue that sometimes this often busy production steps on the music’s toes in that some of the work’s most compelling music is lost in the shuffle, but the action is remarkably faithful to Berlioz’ libretto, albeit with a modern twist. Using the “Hungarian March” as a music video for soldier inductions works especially well, but the idea of dressing the Lyric Opera Chorus up as town busybodies gives the work a “Blue Velvet” feel.

Particularly inspired is having Marguerite’s disabled mother watching television in her room while her daughter is having her diabolical affair with Faust. In Berlioz’ telling, Marguerite accidentally kills her mother by overdosing her on sleeping medication so that she will not interfere with the affair, and the idea of having Méphistophélès watch television with her so comfortably is in itself a wry commentary on the medium.

But of course, none of this would mean much without Berlioz’ amazing music, which is well-served on all fronts. You would expect mezzo-soprano Susan Graham to be glorious in one of her signature roles as Marguerite, and despite being virtually unrecognizable in costume, she does not disappoint. Tenor Paul Groves makes an admirable Faust, even if his top notes in the Act II duet were thin on opening night and bass-baritone John Relyea makes a memorable Lyric debut as Méphistophélès.

This production also gives us some of the finest orchestral playing ever heard by the Lyric Opera Orchestra under Sir Andrew Davis, who clearly came to know this complex score inside and out. Kudos, too, to Donald Nally’s Lyric Opera Chorus, who not only get to sing more in this one work than they would during an entire season, but have to serve as actors intimately involved with the fabric of the action as well; bravo. (Kudos, as well, to the large corps of solo dancers under choreographer Philippe Giraudeau who move gracefully throughout but are rarely perceived to be dancing in the traditional sense.)

One interesting connection to previous Solti CSO concert performances of “Damnation” is the finale use of a small children’s chorus from the Glen Ellyn Children’s Chorus, the group used for those performances, which today goes by the name of Anima-Young Singers of Greater Chicago. They, too, were required to be acting onlookers as the chorus of angels that welcome Marguerite to her heavenly reward.  (Dennis Polkow)