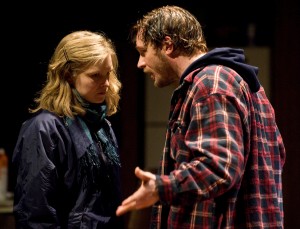 Expectations were especially high for the world premiere of Brett C. Leonard’s “The Long Red Road” at the Goodman, thanks to the Chicago directing debut of Oscar-winning actor Philip Seymour Hoffman, and the casting of rising British film and stage star Tom Hardy in a leading role written for him. And I am pleased to say that the set and lighting design meet those expectations, with the Owen Theatre converted by Eugene Lee into a sprawling thrust stage that squeezes right up to the audience, devouring seats and eliminating the opportunity to establish any distance from the tortuous fare unfolding upon it. It’s a magnificent fusion of two separate households headed by two brothers in two separate states (literally and metaphorically), including not only bedrooms, bathrooms and kitchens, but also their places of occupation, a barn and a bar, respectively, the latter where the alcoholic brother Sam spends much of his time communing with the bartender. The homes are interconnected, and characters pass each other like ghosts, suggesting the invisible ties that perpetually bind, even strangle, families. And Edward Pierce’s lighting design is a simple marvel; lamps, across the vast stage, turn on and off to signal the flow of action; the beginning and the end of scenes on a set with no boundaries.

If only the play lived up to its setting, or even its opening, where the audience is greeted by the characters Sam and Annie enjoying a graphic and vigorous shag. It’s a passionate moment, but his idea of talking dirty is to direct her to humiliate him, to call him a drunk, and worse. The worse will most definitely come, but the passion, alas, is quickly washed away with an endless botttle of Ten High bourbon. On a parallel arc, we meet Sam’s brother, Bob, and are given a taste of his own sexual entanglements, between his self-consciously growing pedophiliac urges toward his niece, Tasha, and his once-carnal-but-two-years-celibate relationship with her mother, Sandra, a woman who lost her legs in a horrific car crash that also took the life of Tasha’s sister (in a strong portrayal of a miserable woman by the disabled actor, Katy Sullivan). Before long, Bob has to come to the aid of Sam, and the dark contents of both their damaged souls fly out like Pandora’s box as Bob’s formerly stable persona darkens, suggesting that he’s less motivated by fraternal responsibilty than by deep sibling rivalry.

Leonard sets his play on an Indian reservation in South Dakota where Sam seeks sanctuary—from the law but also from standing out as a drunk. When Bob arrives and torments Annie (young local actor Greta Honold, holding her own) in Sam’s absence, he points out that neither of them are Indians, so why are they there? The audience probably shares that incredulity, especially since the only Indian in the play is the wise old bartender Clifton (played sagefully by Marcos Akiaten), who holds off the Indian thugs who want to kill Sam for his racially offensive drunken tirades. Because there are only two kinds of Indians in this country: wise old “chiefs” and drunken savages. The play draws its title from the Native American concept of the Red Road, or the right path of life, which is not the drunken meander even if the only adult Indians in the play seem to live in the bar. (Honold’s Annie is a schoolteacher on the reservation who apparently teaches from the book of Howard Zinn, charitably sharing the genocidal history of the European settlers on this continent with the children. Not only is she trying to save Sam, she’s going to save the Indians from the whitewashing of history!)

The Indian Problem is a symbol of what plagues this play: most of the characters are just too one-dimensional. Most notably, though Hardy gamely spends most of the play in boxers and a wife beater sputtering inebriated sob stories about his useless existence, it’s hard to see why Annie loves him so, or why he was once the favorite of his parents. Perhaps that’s the point—he’s too far gone to retain any of his humanity—but without some reason for us to want him to pull through, the whole play falls apart. Tasha’s character (played earnestly by the teen actor Fiona Robert) is more intriguing on the surface: she transforms from teen slut into daddy’s little girl, in a reversal from the usual narrative arc, though that genie won’t go back into the bottle for Bob, alas. Only Bob’s character, in a nuanced performance by Chris McGarry, with his passion for cultivating mushrooms boring his family but putting bread on the table, has the depth to engage us: he’s the anchor of sanity, it seems, but there’s this little problem with a pedophiliac urge. Will he succeed in its suppression?

It’s no secret that alcoholism destroys not only its sufferer, but many of those around him as well, sometimes taking generations to undo. But its scourge casts its burden unfairly. While time passes in a state of deadened euphoria for the drunk on a bender, his family and friends hang on with time standing still, while they wait for the worst. “The Long Red Road” succeeds in re-creating that wait, with a two-hour play that feels like two too many. (Brian Hieggelke)