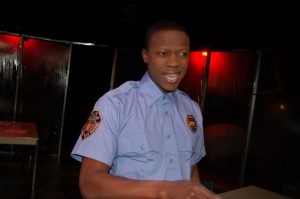 Two NYPD officers, one white and one black, respond to a 911 domestic-violence call in a bad neighborhood, and a 16-year-old autistic African-American boy ends up dead. The story, about the complexities of racism and the impossibility of uncovering any objective vision of the truth, is nothing new—while playwright Andrew Case obviously has both passion for and knowledge about police corruption, it’s impossible to escape a sense of recycledness about the play. The writing is sometimes incisive; a beat reporter retells the story of the rape charges against Kobe Bryant by a white woman, concluding “Tell me what you believe about this case and I’ll prove you a bigot.” Unfortunately, these lines don’t add up to anything striking overall, and the only new addition to the genre that the show provides, a cop message board called “The Rant” wherein angry, racist tirades are posted, isn’t enough to make the production feel original. This sense extends to both heavily TV-influenced direction  and performances, by a “traitor” black cop, our beat reporter and a do-gooder Persian woman investigator respectively, that aim for archetypal but land firmly in cliché, especially when the characters yell at one another sanctimoniously. The show’s strongest element is the raw fury of newcomer Shariba Rivers performance as the boy’s mother, whose opening rant and version of the events is far more gripping than anything that comes after. (Monica Westin)