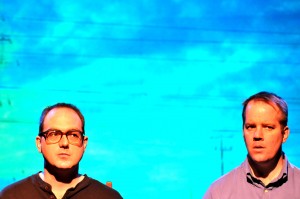 Based on real events in Germany, “Adore” is the love story of a man who wants to eat his lover, and the willing victim he found who wanted to give himself up in the name of true love. “This is an exaggeration of you,” we’re told in the beginning, and the show works hard to make the characters seem both utterly creepy and completely human by giving them numerous speeches about their hearts and turn-ons. It also goes without saying that the show tries to be edgy, which might be its downfall. The problem with this production isn’t the story it tells—which is visceral and painful to watch in a way that would have delighted Artaud—but the way it’s articulated. The writing is often hackneyed, with ruminations about true love and metaphors for being absorbed by our lover that are nothing new, awash with profanity—things are constantly described as “really fucked up” or “fucking real.” While the characters are middle-aged men, they end up speaking like teenagers. The other major problem is a lack of any kind of theatricality; the play is comprised of almost all monologues, delivered as backstory by the major characters against a screen of fucked-up home movies, instant-message conversation on computer screen, and in one case, the current monologue about love letters written in cursive. Indulgent and conceptually simplistic, not much is added in this production to the story, but it will turn your stomach with its narrative of ultimate masochism, if you’re into that kind of thing. (Monica Westin)