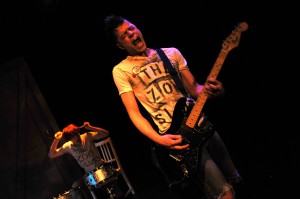 Two suburban teenagers  in the mid-eighties discover punk music and, ostensibly, themselves through it. Hero and antihero, Mickey and Duck alternate between childlike naivete, adolescent fury, and a seen-it-all affectation covering up real crises of identity. That is to say, they’re typical teenage guys (except for being on rollerskates). What’s not typical is how creatively Pavement Group manages to re-imagine this story in their production, forging a fresh look at the ways we join social movements to hide from ourselves. It’s also an incredibly funny play, with dialogue that runs between witty banter and insults of a Beavis and Butthead nature without dumbing the production down, and some of the worst and best names of nonexistent punk bands you’ve never heard of. Acting is controlled, perfectly paced, and full of hormonal energy; and this edge extends to savvy technical theater. But the most impressive feat lies in the final scenes of the play, which explore the real ideology of punk music, as opposed to its mere fashion, and actually manage to make it seem relevant again. (Monica Westin)