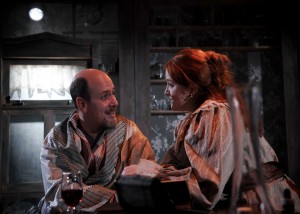 Director Kimberly Senior knows Chekhov. Over the past five years, this veteran Chicago director has developed a profound affinity for the plays of the great chronicler of aristocratic angst at the turn of nineteenth-century Russia, and showcased some of her finest work through her intimate, ensemble-rich and emotionally-devastating renderings of “Three Sisters” and “The Cherry Orchard” (the former remains of the most perceptive versions of that play I have ever seen).  If her “Uncle Vanya,” now at at Strawdog Theatre, isn’t as moving as those other two productions, it is nevertheless a worthy contribution to Senior and Strawdog’s continuing exploration into the playwright’s canon, and confirms that a Chekhov play directed by Senior is still cause for celebration.

The theme in “Uncle Vanya” is one of missed opportunities in both love and life, and most of the play’s characters grapple with the painful realization that sometimes a lifetime of hard-work, pleasure-postponement and self-sacrifice amounts to diddly-squat. That’s all here, of course, but what strikes me most about Senior’s production is an interpretive shift that emphasizes the female characters in the play. There’s Yelena, the twenty-something young wife of a stuffy professor several years her senior, who’s buried any hopes of carnal and emotional passion even though plenty of willing suitors—obsessed with her stunning looks and forbidden-fruit allure—make themselves available. Sexy actresses of the screen and stage have tackled this tricky part, which also happens to be one of Chekhov’s most underdeveloped female characters, and remained content to play her as a shallow object of lust that enjoys toying with the men around her. Not so for Strawdog ensemble member Shannon Hoag, who registers every flinching moment of Yelena’s painful self-awareness on her beautiful face. She’s a voluptuous yet vulnerable actress, and Hoag has downplayed the character’s wistful sexiness and subjugated the pretty languor for intellectual complexity. In this way, she reminds me of what Martha Plimpton did years ago when she was cast against type as Ibsen’s Hedda Gabler.

And then there’s Michaela Petro as Sonya, Vanya’s niece who knows better and yet wastes a lifetime of unrequited love on a man who doesn’t even acknowledged her existence. Even though Chekhov’s script constantly refers to this character as prim and homely, Petro, equipped with seductive blue-green eyes, cheekbones to die for and passion seeping from every pore, is anything but. The men who fail to “see” her in this play are clearly stupid narcissists, and Senior’s larger preoccupation with the way men mistreat and ignore women becomes even more pronounced.  (It’s worth noting that Senior’s only lighting effect in an otherwise naturalistic production is for Yelena’s first-act monologue on the destructive nature of men when it comes to women and the environment.)

Not discounting some of the respectable male turns in this “Vanya”—Tom Hickey humorously emphasizes the title character’s sardonic side while Kyle Hamman as Astrov finds depth in a self-abusing alcoholic who is also an abusive misogynist—it’s the performances, more so than the production as a whole, that more effectively register Chekhov’s sharp shifts of tone from lamentation to laughter to despair. Disappointingly, the overall tone to Senior’s production is more one-note this time around:  low-key, quiet, elegiac. And yet, it’s still a deeply affecting production, one of the better revivals of “Vanya” I have seen, and a great first-time Chekhov for those unfamiliar with the playwright. (Fabrizio O. Almeida)