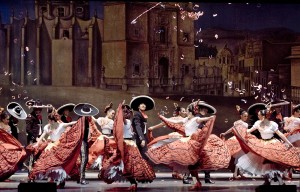 In 1952, ballet dancer and choreographer Amalia Hernandez founded a small company dedicated to collecting and presenting traditional dances from across Mexico. Now, more than fifty years later, the Ballet Folklorico de Mexico de Amalia Hernandez has more than quadrupled its ranks and amassed a remarkable catalog of indigenous Mexican ceremonial, spiritual and celebratory folk dances, each awash in color and bursting with energy. In this, the centennial year of the Mexican revolution and bicentennial year of Mexican independence, the Ballet Folklorico is touring the U.S. with a special celebratory performance; voluminous dresses will swirl, Cuban heels will stomp, and Charros will leap in a program high on spectacle, featuring revivals of several pieces, some that haven’t been performed in fifteen years.

I asked Salvador Lopez, executive director of Ballet Folklorico and (grandson of the late Ms. Hernandez), about the challenges of presenting vernacular dances, culled from small villages and intended for participation over performance, in a grandiose setting like the Auditorium Theater.

“This was the talent of Amalia,” Lopez tells me. “She could translate these dances for the stage. Some of these dances were performed nonstop for two or three days as a part of ritual or religious celebration. How do you put it on stage and make it a two- to three-minute dance, very colorful and very spectacular without losing the spirit, the essence of the dance, the essence of the music, of the place? The richness of our culture is the diversity from one place to the next. From north to south you see completely different dances, completely different music. This culture allowed Amalia to create a strong, plural performance based on our culture.”

Some of the cultural history presented in this weekend’s program includes Aztec theology, Yaqui hunting preparations and Husatecan marriage. “Revolution,” a piece commemorating female soldiers in the revolution of 1910 is a centerpiece of the show. (Sharon Hoyer)