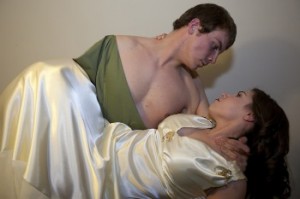 Project 891’s slapstick ode to the biblical movie epic is intentionally short on production values but long on charm. Its “hey kids, let’s put on a show” aesthetic rivals the glorious cheesiness of the original productions themselves.

The funny hits some speed bumps and both comedy and melodrama are over the top, but the camp doesn’t distract. Simon is leading-man charming, Schutz has likeable ingénue purity and Lozano’s gee-whiz honesty is appealing (someone needs to wipe the boy down after the sweaty battle scenes). The story’s final physical skirmish runs long, but Beau Forbes’ fight choreography is corny entertainment. (Lisa Buscani)