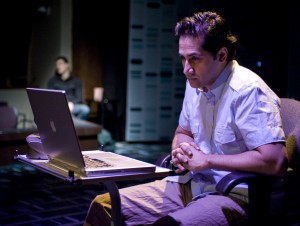 Khurram Mozaffar in "Bolt from the Blue"/Photo: Michael Brosilow

There’s no denying the noble aspirations of Chicago’s Silk Road Theatre Project, which aims to give voice to those with origins all along its namesake passage, including Asian, Middle Eastern and Mediterranean peoples. For “The DNA Trail: A Genealogy of Short Plays About Ancestry, Identity and Utter Confusion,” they’ve combined that mission with a study of the effects of genetics, a particularly relevant topic with all the recent breakthroughs in the study of the human genome. That’s a lot of ambition, and unfortunately, the seven short plays commissioned by SRTP for “The DNA Trail” don’t quite combine to create an entity that lives up to it. In some of the plays, recitations of college-science-textbook talk combined with almost caricature-like vignettes reminded me of the educational movies we used to enjoy in school, like “Donald [Duck] in Mathmagic Land.” Of these, highlights included Silk Road co-founder Jamil Khoury’s autobiographical upending of stereotypes, “WASP: White Arab Slovak Pole,” and David Henry Hwang’s hilarious exploration of the increasing ability to learn details about our ancestry dating back to the ancients—his protagonist engages with a horny Cleopatra and a violently unhinged Ghengis Khan, who’ve both contributed to his gene pool—”A Very DNA Reunion.” These pleasant pieces are mixed in with more serious fare, from Velina Hasu Houston’s morbidly dreadful “Mother Road” to the moving “Bolt From the Blue,” wherein playwright Shishir Kurup explores the still-inevitable tragedy of certain genetic traits while commenting on the way our digital age fosters both distance and new modes of intimacy.

Steve Scott directs the whole thing with as brisk a pace as the material allows, and the cast often performs at a level surpassing much of the material, especially Khurram Mozaffar, who shifts personalities among the plays with notable empathy. Given the high-concept origins of the work—each playwright commenced with a personal DNA test for inspiration—Silk Road was kind of stuck with whatever grew from its “seeds.” Like any gene pool, the result is a mixed bag. (Brian Hieggelke)