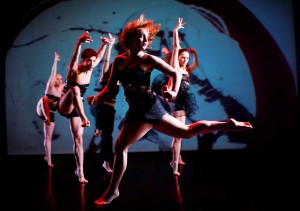 Carrie Hanson has built a reputation for making location-conscious dances. Her works created for The Seldoms—most famously “GIANT FIX, ” performed in a waterless swimming pool—are constructed very much within their environs; place is as integral a facet of the performance as music and costuming. No surprise then that the impetus for her newest work, a collaborative effort with visual artist Fraser Taylor, percussionist Tim Daisy and costume designer Lara Miller, was an inquiry into boundarylands, or the spaces between spaces. “Marchland,” playing this weekend at the estimable MCA Stage, is a departure of sorts for Hanson—at least in terms of locale. The minimalist room provides a sparse, formal canvas for Hanson to create her middle space. The Seldoms are the only Chicago-based dance company on the MCA program in recent memory, an impressive nod to Hanson’s work.

“Oh, it’s dreamy,” Hanson says of performing at the MCA. “The theater itself is very modern and has a minimal décor. Because this piece is so visual, the MCA is a nice frame for this work.” The space will be defined by imposing black fencelike set pieces bracketing the stage, which will be stripped of the curtains that traditionally hide the wings. “They really demarcate the space of the stage and what’s behind it,” Hanson tells me. “Hopefully those are felt as imagined spaces or territories and the stage becomes the marchland, the space between.”

The term marchland is a lesser-known synonym for borderland, one that Hanson stumbled across while researching the concept of areas in dispute. The piece was initially inspired by an abstract animated video entitled “CREVICE” by artist Fraser Taylor, who defined his process creating the film as mark-making. “How do human beings make marks?” Hanson wondered. Taylor, the visual artist, marked with ink and thread; Hanson, the physical artist, demarcated in space. “Part of that mark-making is claiming space and designation of territory. This became very thematic for me. And I liked marchland because it referred to a particular space or territory, and it contains the word march, which has reference to movement.

“I did reading around various borderlands that are full of conflict—the space between Afghanistan and Pakistan, the Israeli-Palestinian issue, North Korea and South Korea, Mexico and America,” Hanson says. “There’s nothing that literal in the dance—I work in abstraction but I like to work in real on-the-ground issues. It seems like right now there are so many places in conflict and America is so involved with those places. I really wanted to go there and the question became how do I put that in a dance piece? Space is something I can deal with; it’s one of the components we have at our disposal. You see a lot of proximity between bodies, and then intersection between that proximity. The figures on stage are often creating physical barriers around themselves and another person reaching around to try to break that barrier. Space is something that we constantly are challenging one another for in the dance.”

The project has been about a year in the making, subject to the delicacies of the collaborative process. The challenges of creating dance inspired and accompanied by film came to the fore for Hanson. “Nick [O’Brien, the video artist who captured Taylor’s drawings] and I have tried to bridge the gap between what I do—a time-based art—and what Fraser does,” she says. “It’s been a real learning experience because I’ve recognized certain values I have. This is a durational event, a sixty-minute-long piece. If I’m asking people to sit there for sixty minutes, I need to create dynamic changes. Even if there’s not a tight narrative, there’s an overall arc—there’s a beginning and end. Structure is something I think about. I’m not sure if that’s something that Fraser thinks about in his work or if it’s relevant. There’s been some negotiation between a visual artist and a choreographer. And then the video artist who is trying to bridge the distance.”

It seems that by exploring concepts of disputed territory, Hanson has defined boundaries, built alliances and found middle ground in her own work.