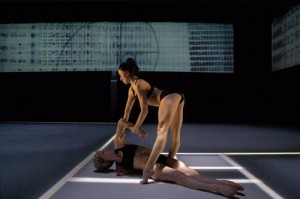 The transformation of cognition into physical grace is an alchemy practiced by every dancer, but choreographer Wayne McGregor has spent more than ten years with his company Random Dance putting the machine under the microscope to better understand the technicalities of the art. With consultation from neuroscientists, psychologists, linguists and experts in robotics, McGregor probes the elusive divide between mind and body—and what better close to the Dance Center’s “Science, Technology and Dance” series than McGregor’s “Entity,” a work inspired by the place where the intangible and mechanical meet: within the human body.

Happily, McGregor isn’t interested in widening the gap (disembodiment or subjugation of the dancer are common pitfalls of choreographic forays into technology and dance); his classically trained dancers are lithe and powerful, and in remarkable command of each joint and tendon. Clad in minimal black briefs, the ten sleek bodies in “Entity” execute an astonishingly complex movement vocabulary with precision and fluidity—McGregor’s language is a Babel of styles and references; serpentine spines sidewind across the stage one moment, bodies are shaken by rapid-fire isolations the next, distorted isolations strange and precise as a diamond from another planet. Portions of the piece are fugal, Bach-like orchestrations through space, one wave of movement swelling to fill a gap left by another, an effect heightened by Joby Talbot’s score for strings. Low white barricades washed with light box the dancers in for the first half of the piece, then separate and rise for the second half, serving as the backdrop for projections by Ravi Deepres as music shifts to an electronic score by Jon Hopkins (of Massive Attack and Coldplay fame). Bodies are moved by music, moved by each other, moved by some external, yet skillful force. Contact between dancers is charged with sensuous energy. In an interview, McGregor said that the title of the piece was both a reference to the Other and to the past. Indeed there’s a tinge of retro sci-fi to “Entity”; there’s something Orwellian (or perhaps Gibsonesque) about uniform costumes, the angular lines of light on the floor, the thudding electronic score, the trim perfection of the bodies being manipulated by an external force—like a club scene from a beautiful, dystopian future. (Sharon Hoyer)