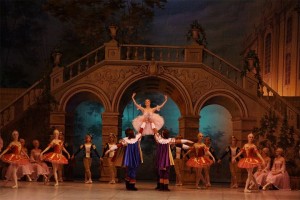 The company that did it first does it again this weekend at the Auditorium Theatre. The Tchaikovsky Ballet Theatre, founded in Perm in 1870 and dedicated to performing Pytor Illych’s works, rolls into Chicago with their production of Maurice Petipa’s 1890 original. “Sleeping Beauty” is widely considered Tchaikovsky’s best ballet and this is the company that originally staged it—needless to say they take it seriously. Principal dancers Natalia Moiseeva-Poleschuk and Sergey Mershin have a small armory of competitive ballet awards between them and the full company headcount is around sixty-five bodies. There will be spectacle and tulle aplenty, along with the superhuman virtuosity one comes to expect from Russian ballet: a satisfying fairy tale showpiece for lovers of the classics. (Sharon Hoyer)