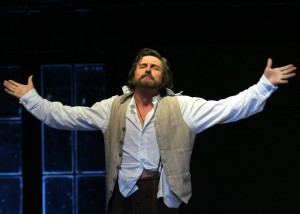 It’s easy for Chicagoans to take great ensemble acting for granted. After all, we get it in abundance thanks to the Steppenwolf Theatre Company. But in reality, you could count on one hand the number of great theatrical acting ensembles in the world, and among them surely is the Maly Drama Theatre of St. Petersburg. On par with seeing Moliére done by the Comédie-Française in Paris, or Strindberg performed by the Dramaten (Stockholm’s Royal Dramatic Theatre), the prospect of experiencing an authentic Russian-language production of Chekhov’s “Uncle Vanya” by the Maly ensemble is one of those rare theatergoing opportunities that doesn’t come around too often.

Courtesy of Chicago Shakespeare Theater and their World’s Stage Series, this “Vanya” is helmed by legendary director Lev Dodin, the Maly’s Artistic Director since 1983. Dodin, whose name is up there alongside Brook, Stein, Bergman and other internationally recognized innovative directors, has in interviews likened his stage productions to a great bottle of wine or great literature—something that should be allowed to breathe, and change with time. And so, this revival of “Uncle Vanya” reaches Chicago after some six years in repertory (a typical “shelf life” for Maly productions), and features six of its original nine cast members including the original Vanya, Yelena, Sonya and Serebryakov.

Having seen Chekhov’s “Three Sisters” performed in Russian some thirteen years ago by the equally luminous Moscow Art Theater, the hallmarks of the Russian approach to theater making should also be on full display at CST:  the lengthy rehearsal process that yields that lived-in feel to the performances, and provides a sense of deep intimacies among the actors on stage; an uncluttered and naturalistic staging that finds meaning in the smallest physical nuance; the glacial pace that makes palpable the tedium of provincial life and the mental malaise shared by Chekhov’s characters. It may be a long evening emotionally, but like the best productions of Chekhov it should be a rewarding one, spiritually. Just make sure your eyes are in proper working order since English supertitles will be projected throughout the Russian-language performance. But given that this “Vanya” reputedly clocks in at more than three hours, at least you can be certain you’ll have plenty of time to read them all. (Fabrizio O. Almeida)