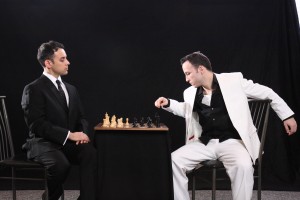 The eighties rock musical “Chess” concerns a World Chess Championship between an American and a Russian and the woman who comes between them, but has nothing to do with the actual game of chess. Instead, it has everything to do with love, as well as chess as a metaphor for rival nationalities and the way politics crush the individual.

In London’s West End it was an operatic, completely sung-through affair, heavy on the kitsch and KGB plotting, and featured dazzling multimedia effects including an entire stage that lit up, tilted and rotated like a giant chess board. On Broadway, playwright Richard Nelson revamped the show into a serious drama laced with vague political overtones. (It was still something to behold; twelve three-sided towers on a revolving turntable swiveled, swept in and out and constantly repositioned themselves into location after exotic location in service to Trevor Nunn’s brilliant and non-stop cinematic vision.)

Theo Ubique is offering the Broadway version (without the spinning towers and scene changes, of course), the only version that is currently available for licensing in America, and it’s the version I’ve seen acted on college campuses, in regional theaters and in amateurish community-theater productions around the country.

Like all of those productions, Theo Ubique’s doesn’t solve the problems inherent in Nelson’s outdated and sometimes confusing book, not even after several spoken dialogue trims and musical number rearrangements by co-director Fred Anzevino. The five-piece band sounds anemic and seldom does justice to the show’s lush score by songwriters Benny Anderson and Björn Ulvaeus and lyricist Tim Rice.  Co-director Brenda Didier, a brilliant and exciting choreographer when she wants to be, offers some of her most trite moves since “Jeckyll and Hyde,” sometimes cluttering the scenes with gratuitous movement. And someone had the bad idea to allow some of the musicians to come onto the stage and “jam” with the actors during some of the show’s big hit numbers (a flutist for “One Night in Bangkok”; a guitarist for “Pity the Child”), momentarily yanking the audience out of the dramatic moment and transporting them to a rock concert.  (For the record, fans of “Chess”—and I include myself principally among them—have long debated whether the show works best as a concert or as a play with songs; in Europe, “Chess in Concert” has had phenomenal success, which says something about the quality of the music in relation to the quality of the storylines over the years.)  But I digress.

What might have been a big misfire for Theo Ubique is almost entirely saved by the production’s superb three leads:  Maggie Portman as Florence; Courtney Crouse as the American Freddie; and Jeremy Trager as the Russian Anatoly. All three handle this challenging musical material with tremendous vocal aplomb. Portman’s voice is as confident and exquisite as ever, and I wish some of her character’s more challenging recitative had not been cut to show off more of her belt. Crouse lets rip a passionate rock sound without sacrificing nuance or feeling, and his one big number “Pity the Child” (guest guitarist notwithstanding) is a devastating dramatic moment. Trager calibrates a strong vocal instrument and vibrato before unleashing their power on his big number’s crescendo and climactic key changes. These actors also anchor the show into a satisfying dramatic experience, uncovering complex and sympathetic layers to these highly unlikeable characters that I never knew existed, and finding pathos in Nelson’s tender book scenes.

It still isn’t enough to salvage the evening, and besides “Chess” fanatics like me and Theo Ubique fans, who recognize this challenging show as just another step in this company’s promising evolution, I don’t see the evening enthralling newcomers to either entity. After all, unlike previous Theo Ubique successes, the design and direction here lack inspiration, and never synthesize into the total theatrical package that was “Evita” or “Man of La Mancha.”  But it’s the best musical theater acting I’ve ever seen come out of this company, and Portman, Crouse and Trager deserve every accolade this show gets. (Fabrizio O. Almeida)