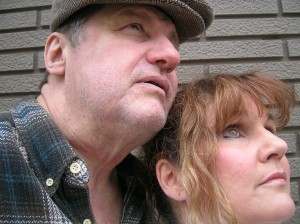 Although just about everyone knows John Ford’s 1952 Technicolor tribute to his Irish homeland, “The Quiet Man,” his 1935 Dublin-set film “The Informer” is not seen as often these days though it was revolutionary in its time, and is often considered the director’s finest film by Fordaphiles. Made on a shoestring budget, Ford made low cost into high art by taking the lack of sets and scenery and shooting them in a highly stylized shadow-filled Expressionistic fashion in the manner of German filmmakers F. W. Murnau and Fritz Lang. The thick fog of the film becomes the foggy thought process of its central character Gypo Nolan, a court-martialed IRA member in  1922 Dubin who informs on his best friend to the British for twenty pounds so that he and his girlfriend can have passage to America. The film won four Academy Awards, including Ford’s first Best Director Oscar as well as a Best Actor Oscar for Victor McGlaglen as Gypo.

Charles Pike’s world-premiere theatrical adaptation pays homage to the Ford film in that it does not seek to delve into the source material of the movie—originally based on Liam O’Flahtery’s 1925 novel of the same name—but functions as a riff on how to take much of the content and context of the film and make it stage-worthy. Gypo was often at a loss for words in the movie and Ford, who had spent most of his career at that point making silent films, allowed actions and symbolism to speak for him. Thus it is rather curious to have the stage Gypo, written for veteran character actor Turk Muller, come out and wax poetic about anything and everything with the audience as if he were a lost chapter from a Frank McCourt novel.

Every once in a while a scene or a shot from the film itself is shown as a backdrop, and the memorable Oscar-winning Max Steiner score is also sparsely alluded to, but by and large it is Turk’s Gypo that dominates the proceedings and makes this an engaging and worthwhile experience. He sits amongst the audience with his whiskey bottle and sulks, engaging them in philosophical drunken banter that would be unthinkable for the McGlaglen incarnation of the character, and yet somehow, it works.

The major flaw of the adaptation—though correctable, assuming this is a work in progress—is that Frankie McPhillip, Gypo’s best friend whom Gypo informs upon, is here only seen as a ghost, and a ghost who inexplicitly does not even know what Gypo had done to him. In the Ford film, the friendship is developed in a memorable pub-scene exposition before Gypo’s betrayal and McPhillip’s brutal slaying while trying to get away from the British, and the “ghosts” are in Gypo’s tortured soul for using the information that Frankie supplied to him there against his friend, which ends up nearly destroying him. Why have faux ghosts when the real ghosts of conscience are so much more haunting?  (Dennis Polkow)