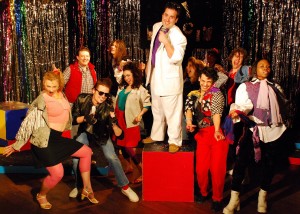 “Hey! Dancin’!” is the new musical entertainment from the Factory Theater and director Sarah Rose Graber.  It’s a cross between the musical “Hairspray” and an episode of “Kids Incorporated” and, since most audiences will know the Broadway musical based on the campy cult film, I’ll say that if you remember and loved the 1980s children’s program that integrated radio hits into its sketch-show format, you should stop reading this now and run down to the Prop Thtr to catch this irresistibly fun and gloriously cheesy piece of 1980s musical kitsch.

The show concerns a sweet, somewhat naïve teenage girl (Halle) who’s absolutely determined to dance on Chicago’s number-one public-cable-access dance show (“Hey! Dancin’!”).  Since co-writers Kirk Pynchon and Mike Beyer settle this conflict early on in their light confection of a script, the main dramatic tension rests with whether or not the program will survive its station manager’s attempt to replace the (“getting too black”) programming of Sade, Janet Jackson and Howard Jones (“He’s British but same thing!” says the ignorant bigot), with the vanilla dance grooves of Bon Jovi (“it’s like classic rock, only worse!” cries a young dancer). There is a revolution against “the man” and you can guess who wins in the end. So like “Hairspray,” “Hey! Dancin’!” is at its heart the tale of a young heroine with a dream of dance superstardom, the show itself a small “Rebel Yell” against prejudice. And since the “Hey! Dancin’!” dancers represent a large cross-section of kid-types who were hitting the dance floor circa 1986 (the year in which the show is set), including a flamboyant homosexual clearly modeled on Pete Burns of Dead or Alive, a vapid Belinda Carlisle clone with teased-out big hair and an African-American Prince priestess, the strongest message in “Hey! Dancin’!” is one of inclusion for anyone who’s different, weird or unattractive (Halle’s unexpected romantic interest is with a pudgy background dancer named Pete, who’s been told by the producers to stay in the way back since he’s “TV ugly,” which means “like real-life ugly, only slightly more ugly.”)

If this suggests that the show is serious or preachy, it’s not. It’s ebullient and escapist. It’s colorful and campy. It’s politically incorrect, poking fun at gays, alcoholics, pedophiles, nerds, sluts, whites and even Australians with equal abandon. Ultimately, it’s one of those pesky little shows that you can’t help but love no matter what. And when the entire company is assembled for a large-group dance number, just give up and give in. Costumed in Rachel Sypniewski’s eye-popping period designs, executing Pynchon’s spot-on eighties choreography (including that shoulder-dance thing Debbie Gibson used to do), to the neuron-inducing synth beats of Nu Shooz’s “I Can’t Wait” or to El DeBarge’s infectiously-melodic “Who’s Johnny,” with Shannon Evans’ retina-blinding lighting in overdrive, it’s like pure “Kids Incorporated” heaven (and if you didn’t Google, YouTube or Wikipedia this reference four paragraphs ago, please do so now).

The show features eighties hit songs you’d expect to hear like “Venus” and “Broken Wings,” and those you might not, like “Shine Sweet Freedom” and “Tarzan Boy.” The script is littered with well-known eighties references like Benetton, Rubik’s Cube and the Palladium (the legendary New York nightclub, although I think these kids would have aspired more to Danceteria), and even gets comic mileage out of obscure ones like TCBY Yogurt and the singer Martika (who by the way started in “Kids Incorporated”).  There is some great dialogue that captures the way teenagers speak (“I’ve never told a girl this before, but if we dry-humped, I think that would be beautiful and shit”).  And despite being saddled with one-dimensional types, the actors give earnest and robust performances that never condescend to their characters and make for some deliciously un-pretentious and funny moments.  There are too many to name them all here, but in particular I liked Catherine Dughi, Esteban Andres Cruz, Anderson Lawfer and Sara Sevigny.

In case you couldn’t tell I love the eighties. But I don’t think you have to also in order to enjoy “Hey! Dancin’!” Not if you can be moved by a silly show with a lot of heart, a lot of lively music, and a lot of great (okay, great-bad) choreography. Just try to stop your shoulders from moving side to side in synch with the music, I dare you. (Fabrizio O. Almeida)