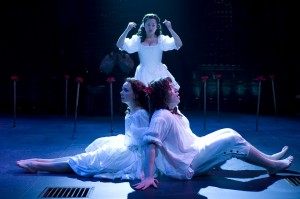 That his imaginative and beautiful new play at Court Theater manages to showcase all of these talents in one compact evening is some achievement.  That the play is Pierre Corneille’s “The Illusion,” a rarely-staged, seventeenth-century comedy from a French tragedian, makes that achievement truly amazing.  And yet, thanks to a sumptuous staging, full of heart, comic brio and modern-day relevance, Newell and his collaborators have taken a minor comedy and transformed it into a great play.

The story is slight yet fantastically exists on three levels.  First there is the tale of a stubborn yet remorseful father (Pridamant) who desperately searches for his runaway son Clindor.  The next is that of the great wizard Alcandre who helps Pridamant by magically presenting pastoral scenes from Clindor’s vagabond life.  These scenes, a compendium of seventeenth-century dramatic stock situations and characters, illustrate Clindor’s adventures as a slave to a cowardly braggadocio, as a wooer who fights rival suitors for the affections of a bourgeois heiress (Isabelle), and as an irresponsible lover who suffers the consequences of toying with the emotions of Isabelle’s headstrong and vindictive maidservant Lyse. The third narrative layer follows an unexpected twist—too good to reveal here—after the revelation of Clindor’s apparent fate.

Along with the House Theatre’s Collette Pollard (in her Court Theatre debut as scenic designer), Newell has given the piece a strong visual stamp. Central to Pollard’s simple set design is a large playing slab underneath which reside moving wheels, springs and screws, as if a giant mechanical watch had been exposed on its side. Ropes and pulleys align the theater’s exposed-brick back walls, work tables and ladders lay scattered around the main playing area, and lanterns—that add flickers of illumination to John Culbert’s chiaroscuro of a lighting-plot, like fireflies at dusk—help complete the illusion that we are in a magician’s cave where anything is possible. Newell uses classical music, shadow puppetry and good old-fashioned sleight-of-hand magic to great effect. A fist fight is accentuated with the bang on a snare drum and a shake of a tambourine, adding a touch of vaudeville to the comic pratfalls. And a few metal coils with red flowers at their tips—that poke out from tiny holes in the stage—take on the semblance of a lush, dense forest upon which mischievous lovers frolic and hide from one another a la “Midsummer Night’s Dream.” In fact, the show is a series of striking images that never degenerates into mere pageantry, but instead reinforces “The Illusion’s” celebration of the artificiality of the stage.

The play’s been enviably cast and features Newell regulars like Kareem Bandealy, Kevin Gudahl and Elizabeth Lido, who possess some of the finest vocal instruments in Chicago. Timothy Edward Kane steals almost every scene he’s in as the narcissistic braggart with the bitchy one-liners (he refers to Lido’s maidservant as “mop and bucket” at one point), and this actor’s impeccable comic timing and occasional touch of camp makes me wish someone would produce another large-scale Feydeau for him to star in. Hillary Clemons imbues her Isabelle with the naïve and (later) hard-bitten patina that made her Irina in the Gift Theatre’s “Three Sisters” so memorable a few seasons back.  And as the wizard Alcandre, Chris Sullivan, with a brawny physical presence only matched by a booming and brandy-soaked bass-baritone of a voice, reminds me of a young Brian Blessed from the Royal Shakespeare Company.

My final and loudest praise however, is for playwright Tony Kushner, who “freely translated” this version of “L’Illusion comique.” It’s purported that Kushner wrote this before “Angels in America” put him on the map and it’s easy to see how and why “The Illusion” is all the better because of it. To have been gay, a political activist and an artist in the early nineties—as Kushner was—was not easy.  The Reagan/first Bush regimes were terrible if you were a LGBT American. Issues of artistic censorship were being debated by the public thanks to pressure from the religious right on the NEA. The AIDS pandemic was a pogrom on the gay and artistic community, as it indeed seemed that love could equal death. And human empathy seemed to be sorely lacking from those who looked on. More than ever before artists were looking to the theater to ask questions, to make sense of the world outside, and to find spiritual solace on the stage.

In “The Illusion,” a father looks on at his son’s life with empathy, and in the process ponders mortality and wonders what his responsibility—if any—is to another person. Alcandre mocks the irony of a father who demands “reason” from the stage, when he won’t demand it from everyday life. And three individuals experience the vicissitudes of love and lust, sometimes to life-altering consequences. Certainly, “The Illusion” is about the magic of making theater, but in Kushner’s hands it also contemplates larger philosophical questions and ideas about the ties that bind, the power of art to heal wounded souls and the theater’s use of artificiality and “lies” to gain insight and find answers in the real world. Not bad for a nearly 400-year-old comedy. (Fabrizio O. Almeida)