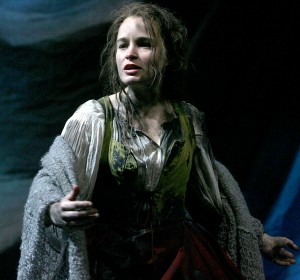 In an ambitious departure from the topical, highly contemporary milieu she’s become known for (most recently evidenced in finest form with “The Crowd You’re In With”), Rebecca Gilman’s “A True History of the Johnstown Flood,” now in its world premiere at the Goodman Theatre,  strives, mostly successfully, to reveal layers of truths about the times we live in through the retrospective craft of a giant historic epic.

A touring second-generation “first family of theater,” the Baxters (Cliff Chamberlain as Richard, Heather Wood as Fanny and Stephen Louis Grush as James, all in fine turns) find their lives and careers intersecting with the vast wealth of the Lippincotts, represented in compelling embodiments of noblesse oblige by Janet Ulrich Brooks as the benevolent patron and Lucas Hall as her son, Walter. When the manmade mountain lake that provides recreation for the rich floods and destroys the working-class town of Johnstown below (in reality, killing more than 2,200 people in 1889, the most devastating disaster in U.S. history at the time),  the play takes a definitive shift in tone. The humorous, airy comedy of manners that makes up the first act suddenly becomes a tragedy that overtly echoes the devastation of Hurricane Katrina.

Goodman commissioned this play, and in this production director Robert Falls is a collaborator of equal authority. The complex scenic machinations and the portrayal of epic devastation, wrought by set designer Walt Spangler, elevate the work. Richard Woodbury’s sound design is similarly spectacular; early on, I swore there were ducks flying around the back of the theater. With “Avatar” making such hay at the cinema this year, it’s easy to imagine this as theater successfully trying to keep pace.

There’s still some editing to be done, alas. While the Baxters’ first-act plays-within-the-play offer humor and insight into the social mores of that time, they run on far too long. There’s a reason that the exaggerated Delsarte acting style of the era (think silent films) is long out of vogue. And the resolution of the story of the Baxter family seems a bit predictable, even if not a pat happy ending.

But “A True History of the Johnstown Flood,” works at a lot of ideas, and mostly works. At one point, James confronts American Red Cross founder Clara Barton with the anguished question, “Where is the authority?” and it resonates with the tragedy in New Orleans. So too, does the indictment of the social order and by extension government’s abdication in its face that underlies the entire play, not only in acts of nature augmented by man, like Johnstown or Katrina, but even by wholly manmade disasters of another ilk, like our recent economic catastrophe brought on by a meltdown of the financial system. But Gilman’s got equal disdain for her own world. Throughout this work, she features the play-within-a-play device to comment on the state of American theater, and its inability, or unwillingness, to reveal the truths of our times. Instead, it wallows in revivals of self-defined classics that seem strangely out-of-step with modern times, or resorts to shrill Marxism on the other end of the spectrum or, worst of all, it candy coats even the saddest of tragedies with the polished pabulum of Broadway. And Broadway will probably love it. (Brian Hieggelke)