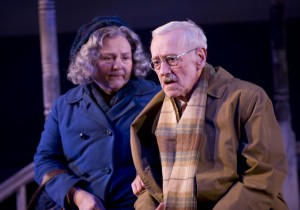 Sure, it’s no surprise to encounter yet another Irish writer with a statistically unlikely mastery of this language. And it’s certainly no surprise to find John Mahoney playing an Irishman nearing life’s end with an unnaturally natural composure. Nor, for that matter, is it any kind of a revelation to tell you that director BJ Jones is consistent in his ability to assemble top-flight ensembles that he molds into a collective of outstanding quality. Unsurprising all, yes, but not to be taken for granted, especially after far too many nights at the theater that point out how exceptional this all is.

“A Life,” Irish playwright Hugh Leonard’s sequel to his Tony Award-winning play, “Da,” unfolds in a single day in the small town of Dalkey, Ireland, when Desmond Drumm (Mahoney) re-engages with important lifelong friends after a disconcerting visit to the doctor. As this happens, a parallel series of flashbacks feature the same characters nearer life’s beginning, laying the foundation for the interlocking relationships. This is no gothic tragedy; revelations are meaningful and heartbreaking, but for the reasons most of us suffer remorse. Not over great betrayals or horrifying transgressions, but rather over smaller but persistent manifestations of obstinancy of character, of insensitivity to the world right around us.

The parallel story structure could have made for some problems, but here it is quite effective in conveying the nuances of maturity, thanks to the quality of the casting. While people might never change, it says, they do evolve, as youthful brio and confidence inevitably give way to a more melancholy resignation. And so while the young Desmond marches confidently to the sound of his own convictions (played with convincing rigidity by Matt Schwader), his older self retains his righteous prickliness if not his self-confidence. He pleads for an accounting of the meaning of his life, “to demand an audit, to know what he amounts to,” but it’s not clear he really wants to hear an answer. Robert Belushi plays young Lar with a manic euphoria that impossibly suggests this part could have been written for someone with his surname. His mature counterpart,  the veteran  Bradley Armacost, retains his youthful infectious joy even after an alcohol-fueled life on the dole, but now an aura of sorrow haunts him. The women in both eras are a bit less vividly rendered, most likely a manifestation of the text rather than a fault in the performances, but the great tragedy of the play, for me, was the unconditional love for Desmond that his wife, Dolly (played young by Joanne Dubach and old by  Penny Slusher in a perfect harmony of character), never stops exhibiting, even in the face of his disinterest. He may be sick, but what he does to her killed me. (Brian Hieggelke)