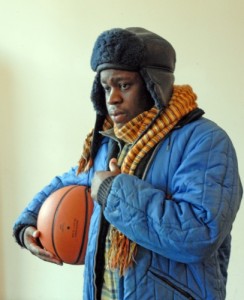 “The Lost Boys of Sudan” debuted in 2007  at a children’s theater company in Minneapolis as a play for teenagers, and it doesn’t seem to have been adapted for adult audiences in its new incarnation at Victory Gardens. Despite its subject material, the play is strangely infantilizing, more like a Disney film (with a cow for a narrator) than a theater piece about genocide. The first half of the play follows three of the “lost boys”  as they journey to a refugee camp in Kenya; the second half finds them in a “Pleasantville” version of Fargo, where they slowly assimilate to a reductive representation of American cultural life. Overall, it’s a fundamentally uneven dramatic experience, more like a workshop than a finished production—and the real story keeps getting pushed to the side by endless exposition, pedagogical speeches (such as a simplified view of what colonialism is, by the cow) and the incredibly stilted second half, where a study of Fargo’s niceness and the refugee’s resiliance is only briefly as interesting as the real drama left behind. The language, too, is in need of focus and profound editing; while the three main protagonists (played laudibly by Samuel G. Roberson, Jr, Leslie Ann Shepprad and Namir Smallwood) have a quick, sharp banter amongst themselves, most of the writing is wordy in a bad way, with rhymed verse that gets oppressive quickly and awkward references to Shakespeare. It’s all unnecessary to the story, which is in no need of bells and whisltles to make it moving—nothing is added in theatricalizing the story, and what gets lost is the story that needs to be heard most.  (Monica Westin)