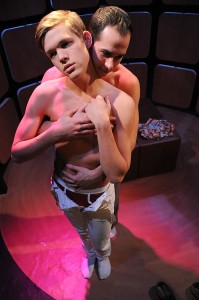 I’m not a big musical fan; musicals require a falseness that makes my teeth ache. Boho’s “Hello Again” revives my love of the genre. Michael John LaChiusa’s song cycle about love and sex across the ages has a heartfelt sweetness that doesn’t leave a bad aftertaste. The piece begins with a “prostitute” soliciting a soldier; the soldier then solicits a nurse, the nurse seduces a college boy, the collegian seduces a lonely housewife, you get the picture. The decades change but the song (and the need) remains the same. No ensemble members stand out because they are all excellent; each performer exhibits the necessary vocal chops and captures the humor and bittersweet yearning the roles require. Co-directors Michael Ryzcek and Stephen Nader give equal time and attention to the music and the intention behind it, and it shows. The sex is steamy, the passion palpable. Nice job, folks. (Lisa Buscani) At The Bohemian Theatre Ensemble, 7016 N. Glenwood, (866)811-4111, through May 1.