by Brian Hieggelke
April 5, 2010Filed under: 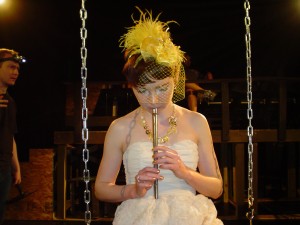 On Friday night at Studio Be, as the new RoShamBo Theatre Company opened its first show, the smell of fresh construction lingered throughout the space, a few paint cans sat visibly under the risers, and a ladder leaned against an exposed wall. These physical signs of a show still in developmental stages are clearly reflected throughout the hour-long production itself.

Consisting of three short, rather disconnected pieces, “Attack Ships on Fire”—a title that references both Rutger Hauer’s final monologue in “Blade Runner” as well as the Revolting Cocks song from the eighties–feels more like a theatrical workshop than a fully-formed show. The often didactic nature of the first and last pieces (“Canary in a Mineshaft” and “No Pity”) begins to wear thin rather quickly and the acting isn’t captivating enough to overlook the meager set design and bland costuming (with the exception of the canary’s outfit).

The highlight here is the second play, a light, deadpan comedy sandwiched between the two darker dramedies. Directed by Neo-Futurist John Pierson, “Likely Targets in a Vacuum” feels the most improvisational of the three shows, with the winsome Eric T. Roth providing engaging commentary throughout to account for the lack of budget (example: “I’m going to pretend to turn on the turntable and the sound guy is gonna play a song”). Jessica Anne (another Neo-Futurist) adds a further layer of enjoyably quirky comedy to the piece about two sisters who find a man has been blasted (presumably by a cannon) into their living room.

Writer and artistic director Michael A. Rose made an ambitious decision in choosing to launch this fledgling company by presenting these three short pieces and bringing in a separate director for each one. Though “Attack Ships on Fire” doesn’t quite hit the mark, with some refinement and a clearer vision, RoShamBo’s future efforts could prove more memorable. (Zach Freeman)