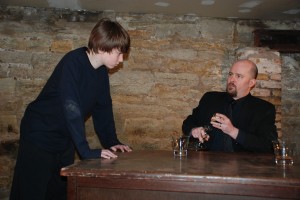 Toward the end of his life, Harold Pinter became as well known for his political activisim as his plays, with outspoken essays and public interviews in which he made increasingly provocative attacks on political figures; at the same time, his plays became much shorter and more overtly concerned with themes of totalitarianism, torture, and oppression. Slimtack Theatre works with three of these short pieces, all dealing with violent oppression in an unnamed country. The plays are heavy-handed, to say the least, with scenes straight out of Kafka and Orwellian nightmares of powerless prisoners who seem to have committed no crimes, and abusive guards who get off on torture. But director Mike Rice understands that it’s the sick enjoyment not just of violence, but of language put to evil, violent uses that’s the most disurbing, and from which the biggest threat comes. The actors embody this sadistic language, with a particularly strong Trey Maclin as an alcoholic despot who, in a series of meetings with an imprisoned family in the final and strongest play “One for the Road,” attempts to use language to both terrify and seduce his prisoners. The basement in which the minimalist production takes place is as strong as another character: dusty and cold, with low ceilings and the sounds of water pipes in the background, it’s the perfect space in which to embody Pinter’s late work—and Pinter would have approved of its underground ethos. (Monica Westin)