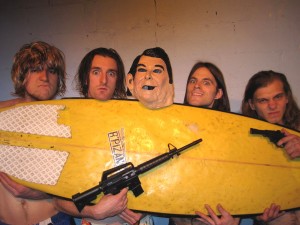 The formula is simple: a live theater version of the so-bad-it-has-a-cult-following action flick starring Keanu Reeves as an undercover FBI agent investigating surfers who rob banks while wearing masks of former U.S. Presidents. The show stays true to the cheesy and often unintentionally hysterical writing, with monumentally energetic acting and surprisingly smart technical theater (on a shoestring budget, they bewitchingly enact surfing, skydiving, car crashes, bank robberies and an epic storm). But what keeps the show afloat is the casting of an audience member to play Keanu Reeves’ character Johnny Utah (there’s a quick audition), and the audience’s relationship to its lead as he stumbles through his lines, at least as well as Reeves, is so responsive and enthusiastic it’s almost heartwarming. The show is BYOB, and it’s entertaining enough to keep drunk folks focused on the show, but you can be both sober and unfamiliar with the film to enjoy the spoof. (Monica Westin)