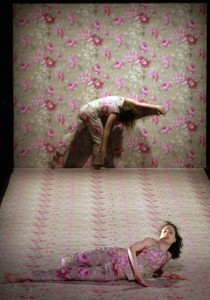 Dancer, choreographer, director, designer, artistic director—when I ask John Jasperse how he balances the many roles he plays within his eponymous dance company, he laughs, pauses and slyly replies, “You don’t wanna know.” The truth of the matter is that Jasperse wouldn’t have it any other way. In the twenty-plus years since he founded the John Jasperse Company/Thin Man Dance, this acclaimed artist—who brings his newest work, “Truth, Revised Histories, Wishful Thinking, and Flat Out Lies,” to the MCA this weekend—has been meticulously immersed in all aspects (creative, technical, and administrative alike) of developing each of his performances. “I juggle all of those things, I just do them,” he says. “As far as the artistic process, it’s a bit easier in some way because I don’t feel like all these [aspects] are different things. I feel like making work is making work—and light, and changing volumes of density in the space, and how you think about constructing physical space, it’s the same questions, they’re all interrelated.” He adds, “I’m really opinionated about all that stuff, so it’s very difficult for me to let it go.”

But Jasperse has certainly not cultivated a reputation as an auteur—on the contrary. “[John’s] always been the consummate collaborator, really open to ideas,” extols Yolanda Cesta Cursach, Associate Director of Performance Programs at the MCA who first brought Jasperse to Chicago in 2002 with “Giant Empty.” In conversation with the production, Cursach organized a roundtable discussion with a group of architects, as part of the performance department’s Artists Up Close series. That conversation brought Jasperse in contact with Ammar Eloueini, and the two collaborated on a new work, “California,” which toured to the MCA in 2005. The connection was, for Cursach, “really exciting, and speaks to how important it is for a presenter to support an artist’s entire development…. It’s not really about the object of the dance, it’s about the person and the team and the collaborators behind it that we find so remarkable about John and the people that he works with.”

With Jasperse’s latest work, the collaborations continue. “Truth,” a dance for five performers that explores “the often fluid boundaries between fantasy and reality” examining “what we believe—and why we believe it”—marks the first time the company will share the stage with live musicians; a string quartet from the Chicago-born International Contemporary Ensemble (ICE), performing an original commissioned score by composer Hahn Rowe. Company member Joe Levasseur once again partners with Jasperse on lighting design. It is, as Cursach describes it, a “family that [John has] built a strong repertoire with. It’s very exciting to have them here.”

Lasting creative relationships have been integral to the evolution of Jasperse’s life in art, a life that is rooted in continuity, endurance and constant investigation. “I don’t really look at a piece as completely independent of a larger trajectory of what I’m working on,” Jasperse explains. “A lot of times I feel like the subject of the next piece emerges in part out of the ‘micro-failures’ of the previous piece… There’s a very organic way of developing from one work to another. I’m not somebody who, for instance, thought ten years ago ‘I really want to make an adaptation of “Aida”’—I work much more in response to daily things.”

It’s the daily ponderances of belief, beauty, and existence that Jasperse investigates in “Truth.” “When we started this piece,” Jasperse says, “the world was giving me a lot of information about how and why people believe in what they believe in. How do we construct beliefs? It seems like there’s a lot of societal dysfunction around those issues…that people are much more interested in the neatness of a lie in general than they [are] in the complexity of the truth. And then I began to think about aesthetics in art and beauty… the way in which people constitute beauty or work with beauty as artists. It’s a belief system…this whole construction, and I’m thinking about how artistic production is creating those belief systems or reaffirming them. Or trying to destroy them and create other ones.”

Those tensions between creation and destruction in personal and social ideologies reverberate in the kinetics of Jasperse’s dances on stage. “I talk about the tension of dancing and not dancing, in a technical manner, and a certain kind of ambivalence—and by ambivalence I really don’t mean indifference, I mean the direct, simultaneity of a deep commitment and passion for it and a desire to reject it, all imbedded in one moment. Those kinds of tensions exist in my work all over, and, in that sense, I’m not an indifferent person at all, I’m extremely opinionated about many, many things, but I also have a very deeply ingrained ambivalence, and that may say something about our time. Certainly it says something about me.”