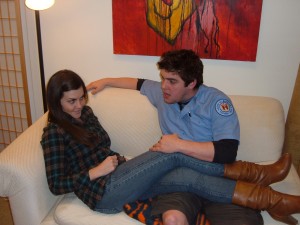 I once took someone who had never seen Chekhov to a production of “Uncle Vanya” and afterwards asked them what they thought. Through laughter, they told me, “So they’re like a bunch of self-absorbed, hyper-articulate narcissists who don’t realize how tragically funny they are—it’s like ‘Seinfeld’.” He was right. But the thing about Chekhov’s characters is that they also have great inner lives—no matter how stilted—and through intellect or emotion (or comedy) ironically exude a great appreciation for living, so much so that watching a good “Vanya,” like any great production of Chekhov, makes you want to do more with your own life the moment you step foot outside the theater. That may or may not be achievable but, to paraphrase Harold Bloom on the subject, good Chekhov makes you want to at least try. The self-absorbed and bland characters in “Chekhov Kegstand,” author Bryan Cohen’s “irreverent take on ‘Uncle Vanya’” at Gorilla Tango Theatre, inspire zilch, even as they sit around and blabber about missed chances here, lost opportunities there and spouting whatever banalities on college life Cohen feels deserves the “Chekhovian” treatment.

Probably setting a Chekhovian-inspired drama in college was Cohen’s first mistake; people usually live during college, and they oftentimes live to lament afterwards. I don’t know anyone who looks back at their college years without some small regret that they didn’t take that great course, or have that great relationship. This is, after all, the time in most people’s lives when they’re at their most free, experimental and least jaded and cynical. I didn’t sit around saying, as one of Cohen’s characters does in this play, “Things were so much simpler in high school.” That kind of sentiment would have been the source of ridicule, not the spark for a dialogue. It’s also the reason why most dramas concerned with the aimless, alienated and hyper-articulate slacker, from the films of Noah Baumbach to the plays of Kenneth Lonergan and Mark Ravenhill, occur post-graduation or avoid school entirely.  The late John Hughes’ films may be an exception, but his characters had tremendous inner lives and were fountains of juicy, authentic dialogue, something almost entirely missing here. I said almost. Actress Kimberly Franck is the best thing in “Chekhov Kegstand.” She plays Lanie, an insecure, sexual, manipulative, coquettish and conflicted college coed who regrettably has sex with her boyfriend’s best friend (as is the case with these things, the situation is not black or white). Franck is a beautiful brunette with expressive and sad eyes, and the only actor on the Gorilla Tango stage who doesn’t sound stilted or memorized because she’s been given a three-dimensional character to play and some good lines to deliver. She does so with delicious droll, lingering on words as if they were truffles in her mouth and bringing great musicality to Cohen’s dialogue. Her character should have remained the center of the play, but in the end Cohen shifts the focus and the play’s denouement to that of Lanie’s overweight and unattractive boyfriend, who calls her a whore, rejects her and tells her she’s a bad person.

I may be taking a parade of puerile and banal scenes from college dorm life too seriously, but the play’s patronizing view of women and its deep misogyny is cause for serious concern. While almost all of the characters are stupid stereotypes, the fact remains that the worst treatment the men receive here is making them geeks or dumb jocks. The women, on the other hand, are predatory alcoholics with uncontrollable libidos and twisted Pygmalion fantasies, which by the way playwright Neil LaBute already took on—brilliantly—in “The Shape of Things” more than a decade ago. Indeed, you don’t know the meaning of embarrassment until you experience the humiliation of a young actress directed—the director is Erik Wagner—to rub her hands all over her face and spout out repeatedly, “Do I smell like penis?”  This is only matched by the play’s cavalier attitude towards date rape. For example, one jock says to another, after hearing about the incredible blowjob his friend’s received from a drunken coed, “Isn’t that illegal?” “Illegal…or awesome!” his friend boasts.

Ultimately, even on its own terms “Chekhov Kegstand” isn’t all that funny, insightful or clever. I recognized several verbal duets in this play that I think alluded to the famous Yelena-Sonya confessional scene of the original. There is a character named Peach whose comic buffoonery recalls Chekhov’s Waffles. And couples cheat, are discovered, and have meltdowns—which may be in the “motif” of “Uncle Vanya” but in actuality has little to do with “Uncle Vanya”, or Chekhov, probably because the author has no idea himself what Chekhov, and “Uncle Vanya,” is really about.  Or maybe it’s just that this wasn’t my college life experience (“Chekhov Kegstand” concerns members of the class of ’99; I was a member of the class of ’97). I didn’t go around calling my female dorm mates “whores” and “sluts” and telling them they were “bad” human beings, and I didn’t sit around and lament easier times in high school. I suppose if I had, I might also produce something like this.  And then use another writer’s name to help advertise my show and undeservedly get an audience. Now that’s a sad thing worthy of some Chekhovian depression. (Fabrizio O. Almeida)