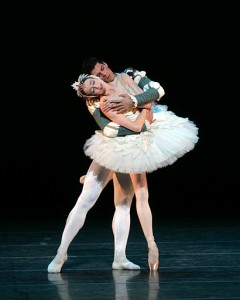 Ask anyone who has never seen a ballet to describe what they imagine it looks like and they’ll most likely talk about a chain of wispy ballerinas in shimmering white tutus strung together by the arms, flanking a slightly wispier ballerina in a slightly whiter, shimmerier tutu who, along with a male partner in tights, defies commonly understood laws of gravity and physiology. In short, they’ll describe “Swan Lake.” America’s cultural idea of ballet has been defined in no small part by Tchaikovsky’s 1876 masterpiece, and in great part by the American Ballet Theatre—the 70-year-old New York-based institution that once had Baryshnikov at its helm. ABT returns to Chicago with full orchestra to fill the Civic Opera with the kind of spectacle and virtuosity it was built for, performing one of the best-known ballets with choreography by artistic director Kevin McKenzie. The engagement opens with a Wednesday night program of works by American choreographers Twyla Tharp, Paul Taylor and Jerome Robbins. (Sharon Hoyer)