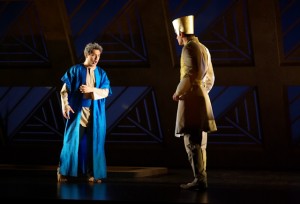 For many of the even most seasoned opera goers, Gioachino Rossini was thought of as a “one-hit wonder.” “It’s true, ” agrees Italian opera scholar and University of Chicago professor Philip Gossett. “For a very long time, ‘The Barber of Seville’ was the only Rossini opera you got to hear consistently in America. But this is a composer who wrote some forty operas and they were all extremely successful.”

Overtures to Rossini operas have always been staples of the concert hall and popular culture—the Lone Ranger, for instance, rode out both on radio and television to Rossini’s overture to “William Tell”—but the last time, say, that Chicago had a chance to hear a full performance of Rossini’s “Moses in Egypt” that Chicago Opera Theater will be reviving this weekend was back in 1863, when Abraham Lincoln was president.

“Many of the works weren’t available in any form until we edited them and made them available to performers,” explains Gossett, who is the general editor of the complete works of both Rossini and Verdi, and the only musicologist ever awarded the Mellen Distinguished Achievement Award with its one-and-a-half-million-dollar cash prize for research. A list of Gossett awards and honors could fill a book, but he is particularly proud of having received the Cavaliere di Gran Croce, the Italian government’s highest civilian honor.

“Another part of the problem was to get singers who could do them,” says Gossett, noting that the technique required to sing Rossini is something that had become largely lost among singers.

A bel canto singer that can sing Rossini, Bellini or Donizetti effectively needs to be able to produce a beautiful sound across a wide range in rapid succession and with the ability to ornament or decorate the melodic line with their own personal stamp that remained within the style. Given that opera houses were becoming larger and larger and projection of the voice began to take precedence over beautiful sound, the technique required to sing Rossini became largely a lost art.

“I feel very strongly that the singer who made it all possible was Marilyn Horne,” says Gossett. “Not only that she could sing these works and therefore spearheaded revivals of them, but she worked on training a whole generation of singers who could sing them with her. Samuel Ramey, Chris Merritt, Rockwell Blake, they’re all Horne prodigies. And since then, we’ve had generations of singers who have followed in their footsteps.”

Horne and her protégés, however, had to deal with the practical reality of larger opera houses, which often meant slower tempos to allow for projection. But a new type of bel canto singer has emerged in recent years seeking to revive the full extent of Rossini’s ornamentation and the brisker tempos that many believe were commonplace in originally singing these works. 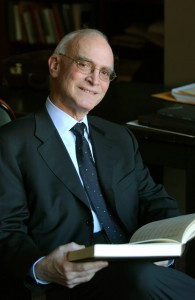 Cecilia Bartoli most typifies this approach, and it was Gossett who first brought her to Chicago back in 1992 for the Rossini bicentennial in a revelatory recital at the University of Chicago, where Gossett has taught since 1968. She has since gone on to become a superstar interpreting bel canto roles on stage—often under Gossett’s guidance—but we won’t be hearing Bartoli in Chicago other than the very rare recital: “she won’t sing in big houses,” Gossett admits. Lyric Opera is three times the size of the houses that Bartoli frequents in Europe.

In any case, Gossett notes that Lyric Opera, under its current general director William Mason, has little interest in reviving these roles. “As long as Bill is there—a lovely man whom I have great respect for—repertory selection is not going to be adventuresome, with occasional exceptions, Gossett assesses. “Ardis [Krainik, Mason’s predecessor] was interested, but not Bill. His sense of what is important in opera is what he knew out of the 1950s.”

And so it has fallen to Chicago Opera Theater to pick up the slack and give the city long overdue performances of Rossini operas that would otherwise go unheard in Chicago. “I think that Brian’s [Dickie, general director of Chicago Opera Theater] choice of “Moses in Egypt” is an inspired one,” says Gossett.

“It is important to recognize that Rossini wrote this piece for Naples in 1818, revised it in 1819, revised it again in 1820, all for the Naples theater. Then he brought it to Paris in 1827 as an expanded grand opera, and that version is the only one that was regularly performed afterwards. It is quite different in many respects: there is a lot of ballet in the French version. In order to do it, Rossini had to cancel some of his most important effects.”

The original opening to the opera, which the COT version is resurrecting with the help of the new performing edition of the original opera that Gossett supervised, begins with all of Egypt plunged into total darkness. “It is unlike any other opera opening,” says Gossett. “It starts with an undulating, unison figure in c minor and stays in c minor until they call Moses. When he invokes God, the sun comes out, and the c minor turns into C Major, it’s as if we’re in [Beethoven’s] Fidelio or the Fifth Symphony. Very compelling, very forward looking, and it takes your breath away.”

“Moses in Egypt” is representative of an entire tradition of Lenten operas with strict prohibitions that retain an oratorio-like character but also preserve character relationships that were typical in Italian opera, in this case, a love affair between a Hebrew slave girl and the son of Pharaoh.

“ ‘Moses’ is a very powerful work that audiences will really enjoy for choral writing that will take your breath away and beautiful duets and solos. The piece is a strange amalgam between the sacred story that we all know and an operatic plot. Rossini did not treat the whole thing as a philosophical problem the way that Schoenberg posed it [in “Moses und Aron”], but rather as the clash of two peoples and two ideals represented by two lovers of each culture.”

And while the work did serve as a precursor a century later to the two Cecil B. DeMille film versions of the story right down to its use of spectacular stage effects such as the parting of the Red Sea that will be part of COT’s production, Gossett finds it particularly moving that the work “ends quietly, in a diminuendo, with the drowning of the Egyptians portrayed instrumentally, nothing gratuitous, with an introspective and sobering reminder that there is death and destruction, even in deliverance.”