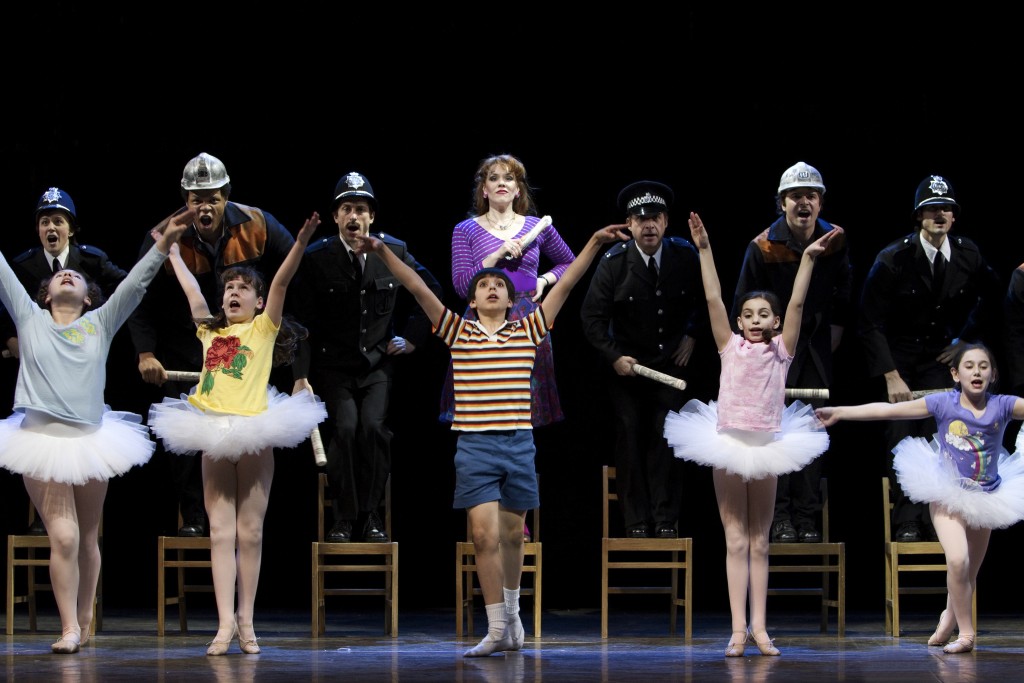 Hit shows don’t come any bigger or fatter than “Billy Elliot—The Musical.” Technically, it’s a stunner.  Choreographically, it’s beautiful to behold, and the dancing is energy incarnate. And the sweet, simple and sentimental story of a coal miner’s young son who becomes a ballet dancer against the odds has been translated from the screen—the feel-good movie of the same name is from 2000—to the stage with admirable aplomb. But after all the hype, the fact remains that “Billy Elliot—The Musical” is simply not a great musical. It’s a great theatrical experience and a great dance show, but one that’s sadly been saddled with an undistinguished score and unmemorable music.

Oscar-nominated screenwriter Lee Hall, who provides the book and song lyrics, has returned to the project along with choreographer Peter Darling and director Stephen Daldry, who also received an Oscar nomination for his work on the film. It’s clear that this team intended to make the musical grittier and darker than the movie. In that version, Billy’s story—a universal one about following one’s dreams, rejecting conformity and the healing power of dance and the arts—was the focus. The story of a strike by a coal-mining community, which divided England in the mid-1980s and led to violence between the strikers and Margaret Thatcher’s police-state government intent on crushing their union, remained in the backdrop. In the musical, both stories have equal weight and share much of the stage time.  (Indeed, “Billy Elliot—The Musical” courageously chucks the traditional overture in favor of opening the show with grimy black-and-white archival footage showing the state of the coal-mining industry in England post-World War II, an effective device that also provides valuable social and historical context to a non-British audience.) Making this story sing required a composer who could musically churn out sweet and melodic—though not syrupy—all along maintaining a sense of working-class grit and British sensibility.  Someone, perhaps, like writer and composer Willy Russell, who wrote the musical “Blood Brothers” in the 1980s. That musical, a sentimental, emotionally big-hearted story set in Liverpool, England, about a working-class mother who gives up one of her twin sons and then suffers a tragedy of Greek proportions when the older boys meet up as adults, is exactly the kind of score that “Billy Elliot” was crying out for. “Blood Brothers” was a score packed with haunting musical motifs, charming recitative and melodically rich and emotionally soaring songs, the likes of which I can still hum twenty years on. In “Billy Elliot,” Sir Elton John has repressed the composer of so many melodious mainstream and musical-theater gems in favor of British-flavored pantomime and pastiche, bland protest rock, nationalistic-sounding anthems and big choral numbers for the coal miners. Those styles are appropriate to the subject matter, I suppose, as well as an admirable stretch for an artist who could have instead delivered the kitschy pomp and hollow sound of an “Aida,” but commendable does not equal tuneful. “Dear Billy,” a number in which Billy Elliot sings about his deceased mother, is nice, but it’s missing all the musical yearning of Sir Elton’s “Goodbye Yellow Brick Road” or “Don’t Let the Sun Go Down on Me.”  “Shine,” a number which musically—and visually in its staging—alludes to Kander and Ebb’s “Razzle Dazzle” from “Chicago,” here sounds like Marvin Hamlisch lite. “Born to Boogie” has an incessant beat, but it lacks the infectious hooks of “Philadelphia Freedom” or “Don’t Go Breaking My Heart.” There’s an attempt at Tin Pan Alley musical flair with “Expressing Yourself” and the big finale, but neither of those numbers come close to matching the melodic exuberance and good piano-thumping fun of Sir Elton’s 1980s Tin Pan Alley phase which included “Sad Songs (Say So Much)” and “I Guess That’s Why They Call It the Blues.” And forget about hearing any soaring ballads that come close to matching the haunting musical emotionalism of 1992’s “The One,” or the musical edge and attitude of “Simple Life.” There is an ensemble number for the company called “Solidarity” with an instantly catchy and jazzy rhythm to it, and “Electricity,” an 11 o’clock number for Billy Elliot, musically serves the moment well. But with so many other outstanding elements to this show, a serviceable score just doesn’t cut it.

Thank heavens, then, for Stephen Daldry’s direction and visual stamp on the show who, if you saw his “An Inspector Calls,” you know is capable of conveying tremendous mood and feeling through the simplest of stage pictures. But the real star here is choreographer Peter Darling, whose work singlehandedly saves the show. His musical staging is an awe-inspiring exercise in juxtapositions, as when opposing formations of policemen and coal miners clash while a lumpy line of prepubescent ballerinas twirl and swirl around them, hopping on chairs for an impromptu pas de deux with the adult men, or contrasting their mix of menacing gesture (the flick of a shoulder here, the sharp swipe of a baton there) and keystone-cop footwork and theatrics with subtle beauty.  Darling’s ballet work, however, is where it’s really at. In taking classical steps and short-circuiting them with a postmodernist kinetic verve and punkish attitude, Darling reminds me of Scottish choreographer Michael Clark, whose work in the 1980s for his own company and the Ballet Rambert was a mixture of defiance and celebration of the art form, which is exactly what Darling brings here to Billy’s terpsichorean tantrums and joyous leaps, and what makes for the musical’s most moving moments. I could go on about the gorgeous attitude splits in mid-air that take full advantage of Billy’s impressive extension, the pas de deux dream ballet that soars (literally on wires), or the jaw-dropping technical brilliance of the boy dancing Billy Elliott (Cesar Corrales on the press night, although he shares the role with three other young dancers), but suffice it to say that Darling’s work is the reason this show will launch a thousand ballet students.

This “Billy” soars.  What it never does, unfortunately, is sing. (Fabrizio O. Almeida)