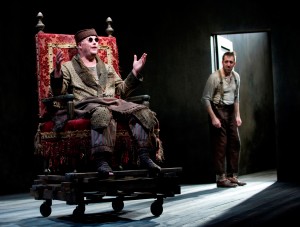 Frank Galati’s production of Beckett’s canonical play is visually elegant, with an effectively angular and alienating set, mostly faithful to the script and loaded with gifted performances. Unfortunately, many of the most affecting elements have been lost in this production, which turns it from an absurd tragic farce into something that resembles a family drama—and that serves more as a showcase for actors than a vehicle for Beckett’s text. The pace is the biggest problem; actors sprint through the first half of the script, leaving little time to linger on dark humor and striking lines, and instead spend great energy on demonstrative gestures and facial expressions rather than seeming to enjoy the language or each other. When it finally slows down, there’s no emotional foundation built. William Peterson makes a dynamic Hamm, but he dominates the stage with so much body language that it’s easy to forget he’s paralyzed, making the threat of him ending nil. Similarly, Martha Lavey as Nell, who’s literally dying, is the liveliest person onstage—in a play about being stuck and waiting for the end, the energy and dynamic arc feels misplaced. (Monica Westin)