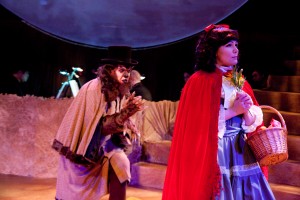 When you tackle Stephen Sondheim’s “Into the Woods, ” there is always the identity crisis of achieving proper tone.  The show is a series of fractured fairly tales that more often than not, can become too sophisticated for children and too juvenile for adults. Some productions tend to play up the fantastic aspect rather literally, while others so push the underlying allegories of the piece that the characters become so tongue-in-cheek as to become hammy caricatures. Kudos to Porchlight Music Theatre and to director L. Walter Stearns for realizing that there is enough depth here to allow any of these views to be effectively accommodated in the same production.

Porchlight has a long history with “Woods,” having staged it in 2001 and its success being a key factor in its decision to switch to an Equity theater after having already made the switch to concentrating on musicals. This update includes more elaborate reductions of the score by Eugene Dizon that, with a handful of strings and woodwinds conducted by Dizon from the keyboard, manage not only to brilliantly evoke the fairy tale world when needed, but also provide enough weight and pathos for the show’s more poignant moments and songs.

The stage has been effectively transformed to a woods-like ambience complete with carefully lit trees that really are reminiscent of a dense forest complete with a large moon center stage that alternates as a lunar backdrop and also for cleverly projected effects, such as the growing of Jack’s beanstalk or the stomping of the giant. 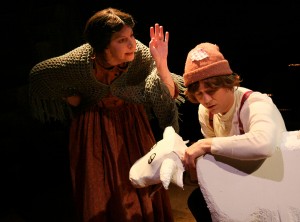 Down to the smallest role, the cast is magnificent; each authentically inhabits this fantastic world and is not afraid to show us what they are thinking and feeling while allowing us—not them—to find their observations funny. When insight hits them based on hard experience, this production does not telegraph them. When Jack, for instance—here played by the eternally young Scott J. Sumerak, who played the role for Porchlight nearly a decade ago—has to part with his cow Milky White, or face his anger and confusion at loss, it is such an authentic journey that you temporarily forget how it will resolve.

The music of “Woods” is deceptively simple: Sondheim constructed the songs to sound like nursery rhymes but they are often layered over one another in ensemble sections that are frightfully difficult to execute as characters are off on their own singing their own distinct counterpoint. Dizon acts as a musical Rock of Gibraltar throughout the show, making sure that entrances are made like clockwork yet in a relaxed and organic manner. It is also striking that there is no percussion in Dizon’s reduction, in effect obliterating a click track that could have been used as a rhythmic crutch for everyone.

The show’s big songs are also well served here though, at least on opening night, the first rendition of “Children Will Listen” by Bethany Thomas’ Witch was plagued by too much volume and vibrato, though the tender, climactic recapitulation more than compensated.  (Dennis Polkow)