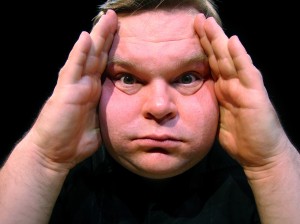 Mike Daisey’s monologues “How Theater Failed America” and “The Last Cargo Cult” will have their Chicago premieres at the end of April and beginning of May at Victory Gardens Theater’s Fresh Squeezed series. Daisey, who was last in Chicago at the MCA for his monologue “If you see something, say something,” about the politics and paranoia of homeland security, spoke with us about his confrontations of different kinds of hypocrisy.

“How Theater Failed America” has had sold-out runs all over the country. You’ve clearly hit a nerve with theatergoers regarding the dysfunction of the theater system in America. What’s your driving thesis behind the show?

I don’t think monologues, theater, should have a thesis, but the play concerns two stories that are woven together. One is about the state of the theatrical workplace today and its failure to fulfill its promise. The other thread could be called “how theater saved Mike Daisey”—it tracks my journey through American theater. The principal function of the show is to bring the audience to a place where we remember why we might have started doing theater in the first place… and then look at where we are now and study that gap. Where is that gap? What would it take to cross it? I want to imagine a world where theater looks differently. In a world where change is happening at a high rate of speed and the landscape is shifting, theater isn’t adapting, just standing flat-footed and watching things change around it. In a large part, it’s a rallying cry. One of my missions of the piece is to bring it to different cities and engage in roundtable discussions about ideas that can make change possible. Things don’t have to be done the way they are now.

Who do you see as the audience for this piece? People who make theater? People who run theaters? Theater-goers?

This piece has a more narrow focus than most of my monologues. The people I’m most interested in reaching are people who love theater and have an investment in the future of theater—a self-selecting group. But then specifically people who practice theater in some form and shape and on some scale. The piece is very much oriented towards those people, and it’s leavened in some part by the humor of the ridiculousnesses of current theater—

What do you see as the particular ridiculousnesses you’re addressing?

Well… in one of the more accurate and cutting examples I walk through the life cycle of a play at a regional American theater where actors are paid in cheese at the cast party. It’s funny, but it becomes slightly less funny… as actors are eating cheese they’re saying “this is worth not having a house, worth not having a stable relationship.” You can see the audience kind of curdle in recognition. The people who are bound up in the system decide to pay people less than minimum wage to do these jobs, and the amazing disconnect is that everyone in theater is a good liberal… but American theater doesn’t look out for its artists. There’s an incredible hypocricy when we create huge new theaters and then in the same breath people say we would never have artists on staff—there’s no money for that! The worst part is they believe the lie.

So you’re exposing the gaps in the ideology, too.

Yeah, exactly. What’s interesting is theater is a realm of something beautiful in its own particular way. It feels cool to be there, and everyone understands its presentation and sportsmanship. The dark side is that theater is very cool, but it’s not very good at telling people when things are broken, when the very people who gave money to institutions in the first place are the only people who could save theaters if they chose to retool. The first step is admitting there’s a problem—like a rehab program… then we have to be honest about actual needs. The side effect is that this isn’t just for the sake of humaneness. You get better theater!