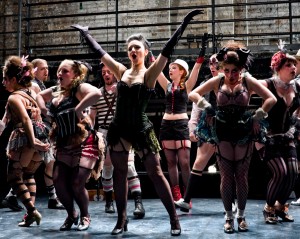 It’s got a crackerjack creative team behind it, and yet something about the Hypocrites’ “Cabaret” never quite clicks.

It’s certainly not the material; those elements may very well render it impossible to have a bad production of this show. For starters, there’s Joe Masteroff’s lean-but-loaded book that continues to be politically relevant. (Indeed, well-meaning citizens minding their own business and dismissing their country’s political extremists as little more than an annoying bunch of fools: German attitudes towards Nazis in the early 1930s, or that of Americans’ for Tea Party “patriots” in the 2010s?)  Composer John Kander and lyricist Fred Ebb’s superb score is packed with melodically rich and toe-tapping-good tunes. And then there’s the structure of the piece itself (the brainchild of legendary American musical theater master Harold Prince), a seamless union of traditional musical numbers that propel the plot and advance characterizations, and those that exist solely to provide ironic commentaries on them, an innovation that years later would be developed and exploited to marvelous use in such other landmark musicals as “Company” and “A Chorus Line.”

The problem here is that the production is as scatterbrained as it is unsubtle. Director Matt Hawkins’ staging never misses an opportunity to highlight a line of sexually suggestive dialogue or double-entendre lyrics to the point of reducing the material’s seediness to something synthetic and slick. Choreographer Marissa Moritz’s work only adds to an overkill of decadence that quickly peters out. Although executed by the hard-working ensemble with a cardio-fitness-class worth of energy, her choreography—a collection of sexually aggressive moves and mimed polymorphous sexual positioning and repositioning—rarely amounts to much beyond the banal, a kinetic frenzy bereft of ideas of which Moritz is capable of, if her previous work with Chicago Dance Crash is any indication. Hawkins also doesn’t seem to have a clear idea concerning the show’s two sets of musical numbers—sometimes the commentary numbers, which should be presented as nightclub numbers, are being used naturalistically as character introspection numbers, and sometimes naturalistic and motivational numbers are disrupted with a self-conscious wink and nod from the cabaret-world characters. Two awkwardly placed intermissions—the second one for no reason that I could deduce—break the evening’s dramatic flow, and Hawkins’ preoccupation with the obviousness of equating Nazism with evil translates into a series of menacing and violent images that become extreme to the point of mind-numbing ineffectuality. And while it’s true that the show has an innate sense of emotional distance built into it—from its use of the Kurt Weill-flavored music to elements of alienation (the “limbo”/commentary numbers, the MC figure)—detachment isn’t what plagues this production’s unsatisfying sense of empty spectacle, it’s the sense of disconnection, and Hawkins’ refusal to simply let the material speak for itself and trust it enough to make its impact. 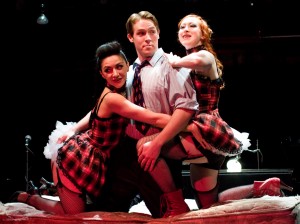 There are positives. While some of the singing voices are particularly weak and the female MC suffers from singing a role that’s musically tailored to suit a man’s voice (actress Jessie Fisher is oftentimes drowned out by the great band under the musical direction of Mike Przygoda), all of the actors can at least carry their tunes and the songs are so musically rich that it’s hard for them to not be enjoyable. And it must be stated that this “Cabaret” is one of the best dramatic approaches to a musical that I’ve seen since director Sam Mendes’ London production of Sondheim’s “Company” in the late 1990s. That production didn’t sound great either, but its serious approach to the book scenes made for some affecting moments the likes of which you typically experience in plays. This “Cabaret” also has its dramatic moments, but only when it isn’t hitting you over the head with them.