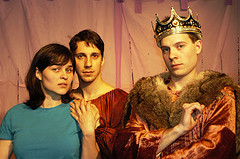 In one century, the heartbroken Tyler (Emily Harpe) sulks in her apartment with her supportive coworkers Beth (Ashley Thornton) and Randy (Ross Compton), while in another, the poet Carvier (Kirk Mason) sulks in a jail cell, awaiting execution by the evil—and gleefully effeminate—Prince Felipe (Mat Labotka). A magical ring (and some tongue-in-cheek blocking) brings the two together, where they must work to stop the ruthless Felipe from taking over Magical France. Billed as a “time travelling romantic comedy,” “Ring Around the Guillotine” is a slapdash mix of sensibilities from popular eighties comedies like “Weird Science” and “Back to the Future” combined with Monty Pythonesque characters and sketch-comedy one-liners. Though the show starts out slow and remains a bit uneven throughout, the script by Chris Tawfik and Anthony Ellison provides enough fun moments (occasionally pushed to laugh-out-loud funny by the comedically adept cast) to propel it through its full ninety minutes. As a tip to finding a deeper appreciation for the show’s sillier side, it doesn’t hurt that Chemically Imbalanced Comedy is BYOB. (Zach Freeman)