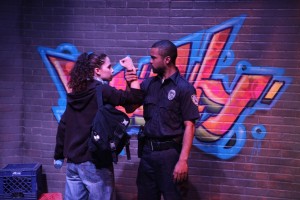 A geeky brilliance and an unexpected wave of rousing feminism lives at the heart of “Welcome to Arroyo’s”, Kristoffer Diaz’s new play at American Theater Company directed by Jaime Castañeda. It’s a world premiere, but the play’s been knocking about at readings and festivals since 2003. Diaz, of course, is the exciting Latino playwright whose first commercially produced play, last season’s “The Elaborate Entrance of Chad Deity,” Diaz’s love letter to professional wrestling, just nabbed a nomination for the Pulitzer Prize in drama. With “Arroyo’s”, Diaz once again taps his inner pop-cultural geek—this time for hip-hop—as well as his inner feminist, to produce an urban comedy that dares to place women at the birth of modern-day hip-hop.

There is historical significance to the South Bronx, New York, circa the late 1970s—the place and time where rap and hip-hop culture were most likely birthed. “Welcome to Arroyo’s” proposes that around this time a Puerto Rican young female DJ named Reina Rey not only infiltrated this world of testosterone-dominated machismo, she also thrived in it, spinning and scratching for a brief shining moment until her abrupt disappearance from the scene in the early 1980s. This we never see but instead are told, by an ambitious young journalist named Lelly (played with bubbly intensity by Sadieh Rifai) who stumbles upon the Reina Rey mythos almost thirty years later, in which time “Arroyo’s” is set. Lelly also believes she may have tracked down Reina’s two grown children, Amalia, a teenaged-girl whose talent for graffiti art gets her in trouble with the cops and Alejandro, Amalia’s emotionally burdened older brother/surrogate father who has been in charge of their family and business—a bodega—since the death of their mother. The action that follows includes two romances, sibling rivalry and Alejandro’s attempt to transform his bodega into a hip-hop music club with the help of two DJs.

If the action sounds tame, the structure and format of this play are anything but.  “Welcome to Arroyo’s” has been written almost exclusively in the hip-hop theater vein, a dynamic aesthetic that challenges all notions of traditional dramaturgy. The play is precociously meta, with characters continually commenting on the action, or breaking the fourth wall. It is aurally dynamic in its inclusion of songs, music samples and sound effects as a soundtrack to the action (the DJs actually spin and scratch “live” throughout the show). Diaz’s writing runs the gamut from monologue (I was reminded of the solo work of Feliz A. Pire and Marga Gomez here) to explosive bursts of stylized and imagistic dialogue reminiscent of playwright Kia Corthron. The writing toys with direct address. It’s digressive at times, explosive at others. Self-indulgent passages abound, and one could argue that Diaz suffers from fascinatingly smart diarrhea of the mouth. There is some truth to all of this, but to reject the play because of it would be to misunderstand the form.

If this were all there was to “Welcome to Arroyo’s”, it would still have made for an auspicious debut. But something else here makes the play exciting and memorable. We are never told if Reina Rey was indeed Amalia and Alejandro’s mother, even if the argument could be made that Amalia has inherited her potential mother’s artistic streak and temperamental will of steel. Or why Alejandro is so terrified at the prospect of this possibility.  The open-ended ambiguity of it all is not the point; what’s at stake here are the tremendous ideas (identity, misogyny, artistic expression and suppression) swirling around inside this play.  With “Welcome to Arroyo’s”, a Hispanic heterosexual playwright has produced a fiercely feminist play, one that asserts a place for women in a field largely dominated by men, and one that imagines their inclusion as integral to the development of modern hip-hop culture. Because, to borrow from American writer and activist Sarah Schulman, “…being able to imagine a cultural progression is the first step toward achieving it.” (Fabrizio O. Almeida)